Leave It to Beaver facts for kids 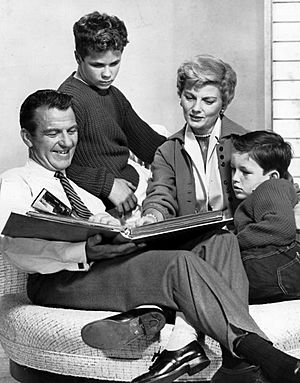 Leave It to Beaver is an American television sitcom series. It first aired from October 7, 1957 to June 20, 1963. The series stars Jerry Mathers as "Beaver"; Tony Dow as his older brother Wally; Barbara Billingsley as his mother June Cleaver; and Hugh Beaumont as his father Ward Cleaver.

The series is about Beaver's adventures at home, in school, and around his neighborhood. Writers Bob Mosher and Joe Connelly based Beaver's adventures on the exploits of their own children. In most episodes, Beaver would get into trouble. His parents would speak to him and explain what he had done wrong. They would hope that he had learned a lesson.

Critics and television viewers liked the series. In 1997, a movie based on Leave It to Beaver opened in theaters. In 2007, TV Land observed the show's 50th anniversary with a marathon (running many episodes in a row). In October 1957 the first toilet was seen on American television in "Captain Jack", the second episode of the series. The boys buy a baby alligator and keep it in the toilet tank of their bathroom. Production Company: DHX Media Studio B Productions (in cartoon) Wildbrain (in The New Leave it to Beaver) Perez-Minton Productions, Inc. MGA Entertainment DLHG Productions Moonscoop CJ Entertainment Magnet Productions Dolman Entertainment

All content from Kiddle encyclopedia articles (including the article images and facts) can be freely used under Attribution-ShareAlike license, unless stated otherwise. Cite this article:
Leave It to Beaver Facts for Kids. Kiddle Encyclopedia.