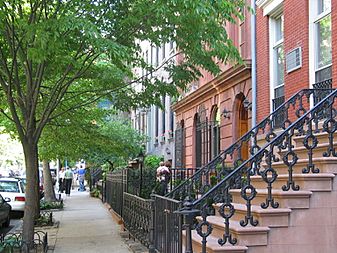 The Chelsea neighborhood of Manhattan in New York City 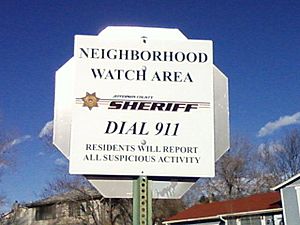 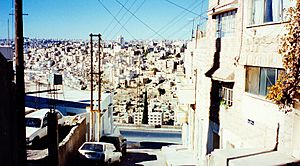 A suburban street in Amman, Jordan.

A neighbourhood or neighborhood is a geographic community in a larger city, town or suburb. Neighbourhoods are often social communities because the people that live in them commonly talk with each other. Researchers have not agreed on an exact definition.

According to urban scholar Lewis Mumford, Neighbourhoods have always exist where humans live. Many of the functions of the city are usually distributed into neighbourhoods. Archaeologists have found evidence of neighbourhoods in the ruins of most of the earliest cities around the world. Historical documents give information about neighbourhood life in many historical preindustrial or nonwestern cities.

Neighbourhoods are usually created by social interaction between people living near each another. They are local social groups larger than households that are not under the control of city or state officials. In some early urban traditions, basic municipal functions such as protection, marriages, cleaning and repairs are done by neighbourhoods. This is shown to have happened in historical Islamic cities.

In the mainland of the People's Republic of China, the term is usually used for the urban administrative division. These divisions are found below the district level. A subdistrict level may exists in some cities. They are also called streets. The naming may be different from one city to another. Neighbourhoods usually have 2,000 to 10,000 families. Within neighbourhoods, families are grouped into smaller groups of 100 to 600 families. These smaller groups are supervised by a residents' committee. These groups are often broken down into even smaller groups of fifteen to forty families. In most urban areas of China, neighbourhood, community, residential community, residential unit, residential quarter have the same meaning.

Neighbourhood (Turkish: Mahalle) in Turkey is an administrative unit within municipalities. It has an official status but no governmental powers. Neighbourhoods are administered by the Mukhtar and the "Neighbourhood Seniors Council". This is a group of 4 people. The mukhtar is elected by the people living in the neighbourhood. He is an administrator of the district governor. Mukhtar also has a seat at the City Assembly. This is an organization for the coordination of the public institutions in the city. Neighbourhood administrators get a salary from the Central Government. They also get money from the fees paid for dealing with certain documents. 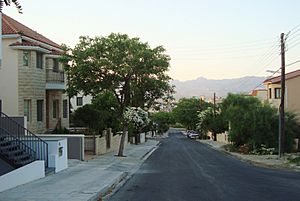 The term has no official use in the United Kingdom. It is often used by local boroughs for sub-divisions of their area for the delivery of certain services and functions. It is also used as a term to refer to a small area within a town or city. The term is commonly used to refer to organisations which deal with such a very local issues, such as neighbourhood policing or Neighbourhood watches. Government statistics for local areas are often called neighbourhood statistics even though the data is usually broken down into districts and wards.

In Canada and the United States, neighborhoods often have official or semi-official status. This is commonly done using neighbourhood associations, neighbourhood watches, or block watches. These may deal with such things as lawn care and fence height. They may provide such things as block parties, neighbourhood parks, and community security. In some other places the organisation is the parish. A parish may have several neighbourhoods in it depending on the area.

All content from Kiddle encyclopedia articles (including the article images and facts) can be freely used under Attribution-ShareAlike license, unless stated otherwise. Cite this article:
Neighbourhood Facts for Kids. Kiddle Encyclopedia.