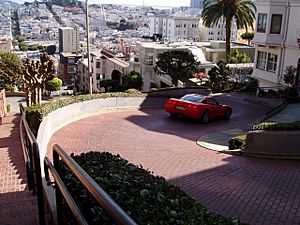 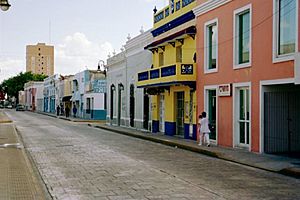 A street is a piece of land, made flat or prepared in another way, so that people can travel on it better. We often use the words "street" and "road" for the same thing, but really a street is in a town.

Many streets are the centre of local culture and people make groups there. New Orleans’ Bourbon Street, for example, is famous for its active nightlife and also for its role as the center of the city’s French Quarter. The Bowery in New York was, for many years, the nation’s center of underground punk culture.

All content from Kiddle encyclopedia articles (including the article images and facts) can be freely used under Attribution-ShareAlike license, unless stated otherwise. Cite this article:
Street Facts for Kids. Kiddle Encyclopedia.