Kobe is the sixth-largest city in Japan and the capital city of Hyōgo Prefecture. It is located on the southern side of the main island of Honshū, on the north shore of Osaka Bay and about 30 km (19 mi) west of Osaka. With a population around 1.5 million, the city is part of the Keihanshin metropolitan area along with Osaka and Kyoto.

The earliest written records regarding the region come from the Nihon Shoki, which describes the founding of the Ikuta Shrine by Empress Jingū in AD 201. For most of its history, the area was never a single political entity, even during the Tokugawa period, when the port was controlled directly by the Tokugawa shogunate. Kobe did not exist in its current form until its founding in 1889. Its name comes from an archaic title for supporters of the city's Ikuta Shrine. Kobe became one of Japan's designated cities in 1956.

Kobe was one of the cities to open for trade with the West following the 1853 end of the policy of seclusion and has since been known as a cosmopolitan and nuclear-free zone port city. While the 1995 Great Hanshin earthquake diminished much of Kobe's prominence as a port city, it remains Japan's fourth-busiest container port. Companies headquartered in Kobe include ASICS, Kawasaki Heavy Industries, and Kobe Steel, as well as over 100 international corporations with Asian or Japanese headquarters in the city. The city is the point of origin and namesake of Kobe beef, as well as the site of one of Japan's most famous hot spring resorts, Arima Onsen. 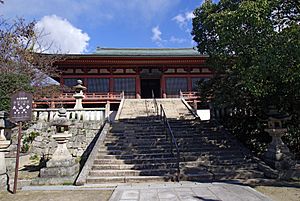 Taisan-ji, the main hall is a National Treasure of Japan

In the late 12th century powerful leader Taira no Kiyomori moved the capital of Japan from Kyoto to Fukuwara, nowadays Fukuwara district of Japan. He planned for it to serve as a trade and political center of Japan. Kiyomori relied his political influence on the trade between Japan and China. But his plan failed and Kobe stayed a small village during a long time.

The area of Kobe was expanded and today it includes Mount Maya, Sumaura Park, Sumaike park with a good spa and the famous Arima spa. Arima spa is one of oldest spas in Japan, whose earliest record is found already in Nihonshoki. Kobe is also famous for its Kobe beef, a very expensive meat delicacy. 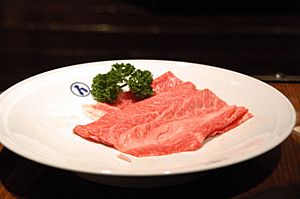 Kobe was founded in 1868 as a port for serving foreign ships. In those days most ports in Japan were closed to foreigners. Many foreigners lived in Kobe, including: westerners, Chinese, Jews, and Indiana. Kobe has one of the more important Chinatowns in Japan. People can find a synagogue and many Christian churches also. Kobe is similar to Yokohama as a place from where modern international culture was introduced into Japan. 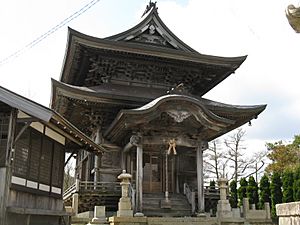 Kobe is most famous for its Kobe beef and Arima Onsen (hot springs). Notable buildings include the Ikuta Shrine as well as the Kobe Port Tower. It is well known for the night view of the city, from mountains such as Mount Rokkō, and Mount Maya as well as the coast. Kobe is also known for having a somewhat exotic atmosphere by Japanese standards, which is mainly as a result of its history as a port city.

The city is widely associated with cosmopolitanism and fashion, said in the Japanese phrase, "If you can't go to Paris, go to Kobe." The biannual fashion event Kobe Fashion Week, featuring the Kobe Collection, is held in Kobe. The jazz festival "Kobe Jazz Street" has been held every October at jazz clubs and hotels since 1981. It also hosts both a Festival, as well as a statue of Elvis Presley, whose unveiling was heralded by the presence of the former Prime Minister of Japan, Junichiro Koizumi. 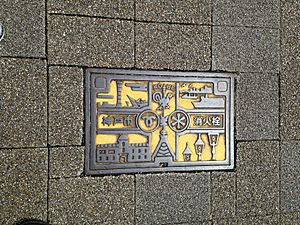 Kobe is the site of Japan's first golf course, Kobe Golf Club, established in 1903, and Japan's first mosque, Kobe Mosque, built in 1935. The city hosts the Kobe Regatta & Athletic Club, founded in 1870 by Alexander Cameron Sim, and a prominent foreign cemetery. A number of Western-style residences from the 19th century still stand in Kitano and elsewhere in Kobe. Museums include the Kobe City Museum and Museum of Literature.

The dialect spoken in Kobe is called Kobe-ben, a sub-dialect of Kansai dialect. 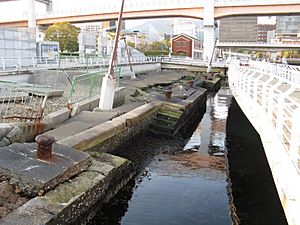 On January 17, 1995 a very powerful earthquake hit the city. Earthquakes are more common in other parts of Japan, but not in Kansai so this earthquake was a surprise for everyone. 6,434 people were killed in Kobe and its neighboring cities, and many more were injured. Many buildings were destroyed.

All content from Kiddle encyclopedia articles (including the article images and facts) can be freely used under Attribution-ShareAlike license, unless stated otherwise. Cite this article:
Kobe, Hyōgo Facts for Kids. Kiddle Encyclopedia.