Kobe Airport is an airport on an artificial island just off the coast of Kobe, 8 km (5.0 mi) south of Sannomiya Station Japan. It primarily handles domestic flights, but can also accommodate international charter flights. 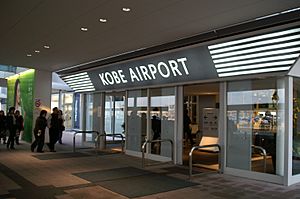 The city government of Kobe proposed an airport in the harbor next to Port Island. Early planning was published in 1982. The airport opened on February 16, 2006. The airport handled its first international aircraft flight in September 2006.

It is officially classified as a 3rd class airport.

Kobe Airport is connected to Kansai Airport by the Kobe-Kanku Bay Shuttle, a high speed ferry which completes the airport-to-airport journey in 31 minutes.

All content from Kiddle encyclopedia articles (including the article images and facts) can be freely used under Attribution-ShareAlike license, unless stated otherwise. Cite this article:
Kobe Airport Facts for Kids. Kiddle Encyclopedia.