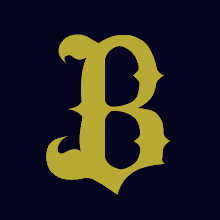 The cap insignia of the Orix Buffaloes.

Orix Buffaloes is a Japanese baseball team. This team was formed by the Orix BlueWave and the Osaka Kintetsu Buffaloes after the 2004 NPB season. The team is based in Osaka and Kobe and play home games at Kyocera dome and Kobe Hotto Motto stadium. The team has not had good results in recent seasons. A former player, Ichiro Suzuki, now plays for the New York Yankees.

All content from Kiddle encyclopedia articles (including the article images and facts) can be freely used under Attribution-ShareAlike license, unless stated otherwise. Cite this article:
Orix Buffaloes Facts for Kids. Kiddle Encyclopedia.