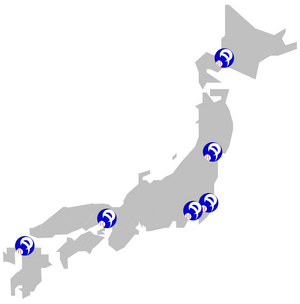 The Pacific League (パシフィック・リーグ, Pashifikku Rīgu) or Pa League (パリーグ, Pa Rīgu) is one of the two professional baseball leagues constituting Nippon Professional Baseball (NPB) in Japan. There are six teams in the league.

In 1949, The league was founded as the Taiheiyo Baseball Union. There were seven teams.

In 1980, the name was changed to Pacific League.

After the 2004 season, the Orix BlueWave and the Osaka Kintetsu Buffaloes merged to form the Orix Buffaloes. At the same time, the Tohoku Rakuten Golden Eagles were added to the league. 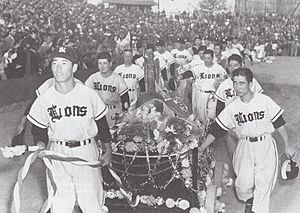 The team which wins the most games in each year is the league champion or "pennant winner".

Since 2004, there has been a three-team playoff system called the "climax series". The teams with the 2nd- and 3rd-best records play in the 3-game first stage. The winner plays in a 5-game final series against the top-ranked team.

All content from Kiddle encyclopedia articles (including the article images and facts) can be freely used under Attribution-ShareAlike license, unless stated otherwise. Cite this article:
Pacific League Facts for Kids. Kiddle Encyclopedia.