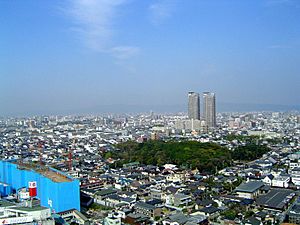 Osaka Prefecture (大阪府code: ja is deprecated , Ōsaka-fu) is a prefecture in the Kansai region of Japan on the island of Honshu. The capital city is Osaka.

Osaka prefecture was created by merging the area of Kawachi Province, Izumi Province and Settsu Province.

In 1994, the Kansai International Airport opened. This is one of the main international airport hubs of Japan.

Osaka Prefecture has borders with Hyōgo Prefecture and Kyoto Prefecture in the north. Nara is west of Osaka. Wakayama Prefecture shares the prefecture's southern border. The west faces Osaka Bay.

The Yodo River (淀川code: ja is deprecated , Yodo-gawa) flows through the prefecture. 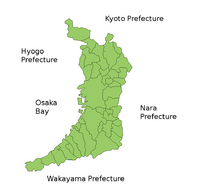 Hiraoka jinja, Ōtori jina, and Sumiyoshi taisha are the chief Shinto shrines (ichinomiya) in the prefecture.

All content from Kiddle encyclopedia articles (including the article images and facts) can be freely used under Attribution-ShareAlike license, unless stated otherwise. Cite this article:
Osaka Prefecture Facts for Kids. Kiddle Encyclopedia.