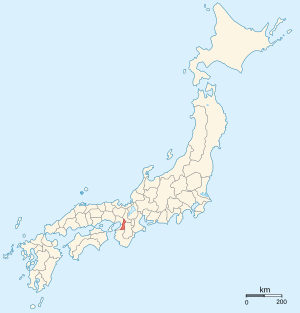 Kawachi Province was a province of Japan in the eastern part of modern Osaka Prefecture. It originally held the southwestern area that was split off into Izumi Province. It was also known as Kashū. The area was radically different in the past, with Kawachi Bay and lake dominating the area over what is now land.

Kawachi province was established in the 7th century. In the 8th century, Izumi was separated from the older province during the reign of Empress Genshō. In the Meiji period, the provinces of Japan were converted into prefectures. Maps of Japan and Kawachi Province were reformed in the 1870s. 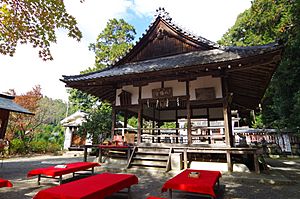 A provincial temple for monks was constructed in the Tenpyō era; they were at modern Kokubuhiganjō in Kashiwara, but they went out of use in sometime around the Nanboku-chō period. Similarly, one for nuns was also near the same place, but it seems that it was in ruin by the Heian period.

Hiraoka Shrine was designated as the chief Shinto shrine of Kawachi Province. The shrine is located in Higashiōsaka. In addition, Katano Shrine in Hirakata, is labelled the "Primary Shrine of Kashū". The secondary shrine is said to have been Onji Shrine. There were no lower-level shrines.

The sōja was Shiki-Agatanushi Shrine; there is a theory that this shrine was moved to where the sōja's land was, and another theory that it came to be the sōja due to its proximity to the capital. 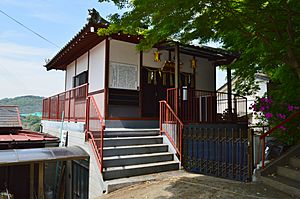 All content from Kiddle encyclopedia articles (including the article images and facts) can be freely used under Attribution-ShareAlike license, unless stated otherwise. Cite this article:
Kawachi Province Facts for Kids. Kiddle Encyclopedia.