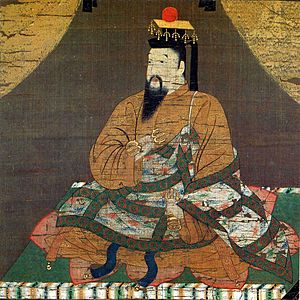 The Nanboku-chō period (南北朝時代code: ja is deprecated , Nanboku-chō jidai), also known as Nambokuchō or the period of Northern and Southern Courts, started in 1333 or 1336 and ended 1392.

In the Nanboku-chō period, there were two rival Imperial courts and two rival capitals of Japan. They were:

During 60+ years of the 14th century, Kyoto was the seat of an pretender Imperial group known as the Northern Court. The series of pretender emperors in Kyoto were supported by the Ashikaga shogunate, but some disputed whether they were true monarchs.

During these years, a Southern Court was established in the Yoshino District of what is today Nara Prefecture. The series of emperors in Yoshino were rejected by the Ashikaga shoguns and their supporters.

Forces loyal to the two rival courts fought for more than six decades. This period of rivalry is sometimes identified as the early part of the Muromachi period of the History of Japan.

In 1392, the Southern court stopped fighting; and the Northern Court seemed to have won the long struggle. However, the claims of the Kyoto pretenders were undermined by scholars and historians. The so-called "emperors" in Kyoto did not have of the essential Imperial regalia until after 1392. The succession (senso) was not passed to them from Emperor Go-Daigo. The pretenders were not confirmed with valid ceremonies (sokui).

In 1911, an Imperial decree confirmed that the only legitimate reigning monarchs of this period were the Southern Court emperors. 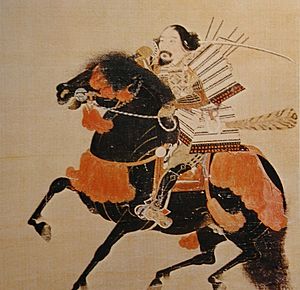 All content from Kiddle encyclopedia articles (including the article images and facts) can be freely used under Attribution-ShareAlike license, unless stated otherwise. Cite this article:
Nanboku-chō period Facts for Kids. Kiddle Encyclopedia.