This 14th century sovereign was named after the 10th century Emperor Murakami and go- (後), translates literally as "later"; and thus, he is sometimes called the "Later Emperor Murakami". The Japanese word "go" has also been translated to mean the "second one"; and in some older sources, this emperor may be identified as "Murakami, the second", or as "Murakami II".

He reigned from Sumiyoshi, Ōsaka, Yoshino, Nara, and other temporary locations.

Prince Noriyoshi was a member of the Southern Court during the Nanboku-chō period of rival courts. 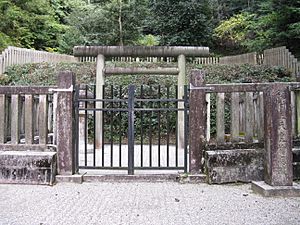 According to the Imperial Household Agency, the mausoleum (misasagi) of Go-Murakami is in Osaka Prefecture. The emperor is traditionally venerated at a memorial Shinto shrine in the precincts of Kanshinji temple (観心寺) in Kawachinagano, Osaka.

The years of Go-Murakami's reign are more identified by more than one era name.

All content from Kiddle encyclopedia articles (including the article images and facts) can be freely used under Attribution-ShareAlike license, unless stated otherwise. Cite this article:
Emperor Go-Murakami Facts for Kids. Kiddle Encyclopedia.