Osaka (大阪code: ja is deprecated ) is the capital city of Osaka Prefecture which faces Osaka Bay and the Seto Inland Sea.

Since 1980 it had been the second largest city in Japan.

It is a city designated by government ordinance in Japan.

Sometimes it is called by its historical name Naniwa.

Because it is by the sea, it is good for transportation. That is why an ancient emperor made Osaka the capital city. In the early part of the 8th century Naniwa was one of capitals of Japan. In the middle of the 16th century Toyotomi Hideyoshi founded Osaka castle and governed Japan in Osaka. The basis of development of Osaka was prepared in those times. Osaka castle was destroyed once by Tokugawa Ieyasu but Ieyasu choose Osaka as one of the political centers in the Western Japan. He made Osaka a direct dominion of the shogun. During the Edo period Osaka was a center of commerce, finance, pharmacy and other products. It was a center for literature and theater. Kabuki in Osaka is as famous as Kabuki in Edo and Kyoto. It is also known for bunraku (a traditional puppet theater) and manzai (a kind of stand-up comedy). 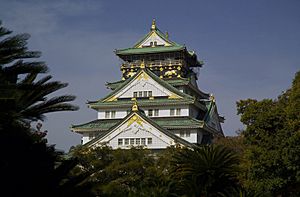 In this region, many people speak a dialect called Osaka-Ben (e.g. "ookini"="thank you").

After the Meiji restoration Osaka was modernized and industrialized. It was a center of Japanese industry. After the World War II its economical importance was relatively less because Tokyo grew as an international city and many companies moved their headquarters to Tokyo. But Osaka is still a large, important city.

All content from Kiddle encyclopedia articles (including the article images and facts) can be freely used under Attribution-ShareAlike license, unless stated otherwise. Cite this article:
Osaka Facts for Kids. Kiddle Encyclopedia.