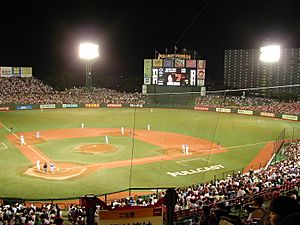 The owner of the Eagles is Rakuten, an IT company. The Eagles are very popular in Miyagi. The mascot character is Clutch and Clutchyna. And in 2016, Switch was added to them.

The Rakuten Seimei Park Miyagi in Sendai is their home stadium. This stadium is in the central ward of Sendai city, near Miyaginohara station [en; ja].

All content from Kiddle encyclopedia articles (including the article images and facts) can be freely used under Attribution-ShareAlike license, unless stated otherwise. Cite this article:
Tohoku Rakuten Golden Eagles Facts for Kids. Kiddle Encyclopedia.