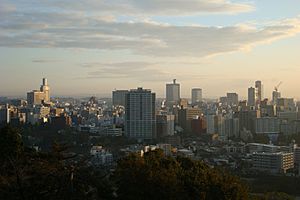 Date Masamune built the castle at Sendai in 1601. The modern-day city of Sendai developed around it.

On March 11, 2011, an earthquake and a tsunami badly damaged the city and its surroundings.

Sendai Airport (仙台空港code: ja is deprecated , Sendai Kūkō) (IATA: SDJ, ICAO: RJSS) is in nearby Natori, Miyagi, 13.6 km (8.5 mi) south southeast of Sendai Station. The airport was badly damaged by the tsunami, but re-opened for limited service the next month. The US State Department said the airport was safe to visit.

There are several ski resorts and golf clubs in Sendai. The football club Vegalta Sendai has its stadium in the city. Sendai has one university: Tohoku University.

All content from Kiddle encyclopedia articles (including the article images and facts) can be freely used under Attribution-ShareAlike license, unless stated otherwise. Cite this article:
Sendai, Miyagi Facts for Kids. Kiddle Encyclopedia.