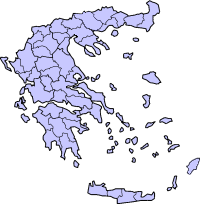 A prefecture is a word used by countries such as Greece and Japan (called νομός, nomós in Greece and called 県 ken in Japan). It is a smaller part of a country with its own government. It is a kind of local government.

It is like an American state or a British county.

In France, it is the head of the department (see Prefectures in France for more detail).

All content from Kiddle encyclopedia articles (including the article images and facts) can be freely used under Attribution-ShareAlike license, unless stated otherwise. Cite this article:
Prefecture Facts for Kids. Kiddle Encyclopedia.