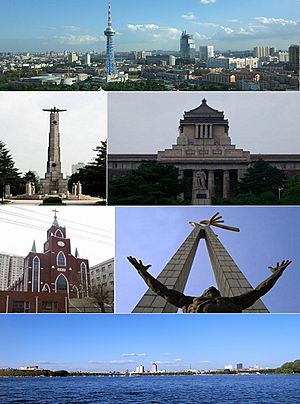 Changchun (simplified Chinese: 长春; traditional Chinese: 長春; pinyin: Chángchūn) is the capital and largest city of the Jilin province of China. The name of the city means "Eternal Spring". In the year 1800, the Jiaqing Emperor set up a trading post in a small village to trade furs and other goods. This village later became Changchun Ting.

In 1898, Changchun got its first train station, which was built by the Russian Empire.

On August 20, 1945, the Soviet Union's Soviet Red Army entered the city, captured Emperor Pu-yi, and drove the Japanese out. They stayed there until the Kuomintang drove them out in 1946. The KMT held the city until 1948, when it got overwhelmed by the communist PLA in 1948. During the Siege of Changchun, up to 80% of civilians starved to death.

Despite the hatred the Chinese have for the Japanese today, the Chinese took down few of the Japanese buildings because they were already so well-built that the Chinese thought it would be a waste to tear them down. Nonetheless, the tumblers that Starbucks sells in Changchun feature the Changchun Railway Station out of all the other monuments in the city, due to the fact that it itself is not a Japanese-made building.

Changchun is also the heart of China's car-making business.

All content from Kiddle encyclopedia articles (including the article images and facts) can be freely used under Attribution-ShareAlike license, unless stated otherwise. Cite this article:
Changchun Facts for Kids. Kiddle Encyclopedia.