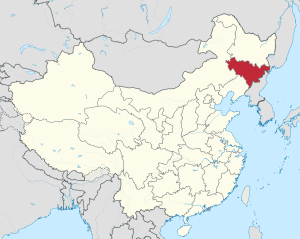 Jilin is one of 3 provinces in the far northeastern part of China, also known as Manchuria. It is bordered on the north by Heilongjiang province, to the west by the "Inner Mongolia Autonomous Region", and to the southwest by Liaoning province. To the southeast lies North Korea.

The capital city of Jilin is Changchun (meaning "long spring").

The terrain and climate are much like that of neighboring Heilongjiang province. Also like its neighboring provinces, one of the main agricultural products is corn, as the climate is too cold (and dry) for satisfactory rice cultivation.

All content from Kiddle encyclopedia articles (including the article images and facts) can be freely used under Attribution-ShareAlike license, unless stated otherwise. Cite this article:
Jilin Facts for Kids. Kiddle Encyclopedia.