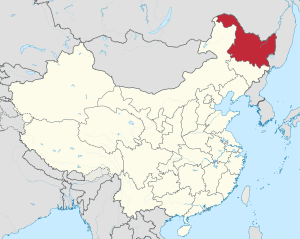 Heilongjiang is the northeastern-most province in China. It is considered to part of the region known as Manchuria. It is bordered by Russia on the north and east. To the south is Jilin province, and the Inner Mongolia Autonomous Region lies to the west.

The capital and largest city is Harbin. There had been a considerable foreign population in the region, particularly in Harbin, first by the Russians in the late 19th century, and then by the Japanese in the 20th century.

The land is largely of plains and rolling hills, with relatively few low mountainous areas. The climate is fairly dry with quite cold winters. There are some famous winter "ice festivals" with elaborate snow and ice sculptures. 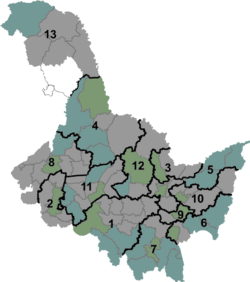 Heilongjiang Province is divided into 12 municipalities and 1 prefecture.

All content from Kiddle encyclopedia articles (including the article images and facts) can be freely used under Attribution-ShareAlike license, unless stated otherwise. Cite this article:
Heilongjiang Facts for Kids. Kiddle Encyclopedia.