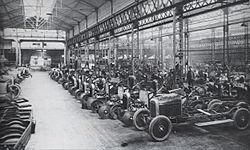 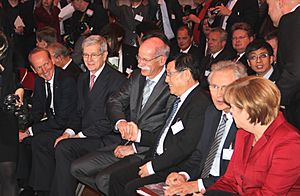 The automotive industry refers to the design, manufacture, marketing and selling of motor vehicles. It is one of the world's biggest economic sectors in terms of the money it makes.

The automotive industry began in the 1890s with hundreds of manufacturers making the "horseless carriage". The Ford Model T was one of the first cars to be sold for very little money. For a long time, the United States was the biggest producer of automobiles.

All content from Kiddle encyclopedia articles (including the article images and facts) can be freely used under Attribution-ShareAlike license, unless stated otherwise. Cite this article:
Automotive industry Facts for Kids. Kiddle Encyclopedia.