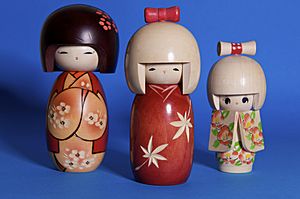 Kokeshi are simple wooden dolls with no arms or legs that have been crafted for more than 150 years as a toy for children. Japanese dolls, originally from the northeastern region (Tōhoku-chihō) of Japan.

They are handmade from wood, have a simple trunk and head with a few thin, painted lines to define the face. The body often has floral and/or ring designs painted in red, black, and sometimes green, purple, blue, or yellow inks, and covered with a layer of wax.

One characteristic of kokeshi dolls is their lack of arms or legs, so as to make easier grasping for children. Since the 1950s, kokeshi makers have signed their work, usually on the bottom and sometimes on the back. 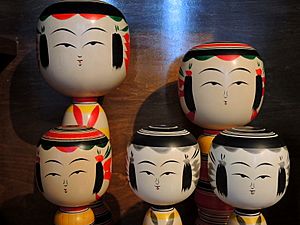 Kokeshi were first produced by kijishi, artisans proficient with a potter's wheel, at the Shinchi Shuraku, near the Tōgatta Onsen in Zaō from where kokeshi-making techniques spread to other spa areas in the Tōhoku region.

It is said that these dolls were originally made during the middle of the Edo period (1600–1868) to be sold to people who were visiting the hot springs in the north-east of the country. 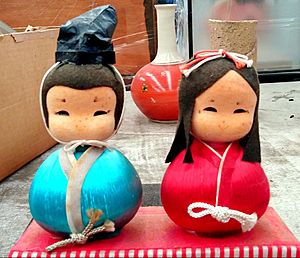 "Traditional" kokeshi dolls' shapes and patterns are particular to a certain area. The most dominant type is the Naruko variety originally made in Miyagi Prefecture. The main street of the Naruko Onsen Village is known as Kokeshi Street and has shops which are operated directly by the kokeshi carvers. There are 250+ types of kokeshi.

"Creative" kokeshi allow the artist complete freedom in terms of shape, design and color and were developed after World War II (1945). They are not particular to a specific region of Japan and generally creative kokeshi artists are found in cities.

The woods used for kokeshi vary, with cherry used for its darkness and dogwood for its softer qualities. Itaya-kaede, a Japanese maple, is also used in the creation of both traditional and creative dolls. The wood is left outdoors to season for one to five years before it can be used. 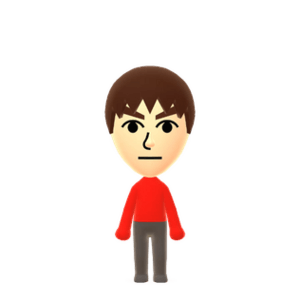 Kokeshi dolls have been used as an inspiration for the style of Nintendo's digital avatars, called "Miis", which are created and customized by players. Their appearance has become the symbol of the platform's overall aesthetic.

In the popular PlayStation series LittleBigPlanet, a Kokeshi doll is seen in the game and can be obtained and used as an item for level making.

Inspiration for the Momiji Doll originates from the Kokeshi Doll.

All content from Kiddle encyclopedia articles (including the article images and facts) can be freely used under Attribution-ShareAlike license, unless stated otherwise. Cite this article:
Kokeshi Facts for Kids. Kiddle Encyclopedia.