Nihongo, JoJo's Bizarre Adventure is a Japanese manga series written and illustrated by Hirohiko Araki. It was originally serialized in Weekly Shōnen Jump] from 1987 to 2004 before being transferred to the monthly seinen magazine Ultra Jump in 2005. The current story arc, JoJolion, started in 2011. JoJo's Bizarre Adventure is currently Shueisha's second largest manga series with its chapters collected into 121 tankōbon volumes and counting.

A six-volume original video animation adaptation of the later half of the series' third story arc was released from 1993 to 1994, followed by another seven-volume series covering earlier parts of the arc from 2000 to 2002. In 2012, an anime television series began broadcast on Tokyo MX and covered the first two-story arcs of the manga in 26 episodes. A second 48-episode season covering the third arc was broadcast in 2014 and 2015, a 39-episode season adapting the fourth aired between April and December 2016, and a new season adapting the fifth will premiere in October 2018.

The JoJo's Bizarre Adventure manga has over 100 million copies in print, making it one of the best-selling manga series in history, and has spawned a large media franchise that includes several novelizations and video games, action figures, a jewelry line, and even snack foods. From 2003 to 2005, Super Techno Arts released both OVA series in North America. Viz Media released a translation of the third part of JoJo's Bizarre Adventure in North America from 2005 to 2010, but began publishing the series from the beginning in 2015.

JoJo's Bizarre Adventure tells the story of the Joestar family, a family whose various members discover they are destined to take down supernatural foes using unique powers that they possess. The manga is split up into 8 unique parts, each following the story of one member of the Joestar family, who inevitably has a name that can be abbreviated to "JoJo". The first six parts of the series take place within a single story, while parts 7 and 8 take place in an different setting. 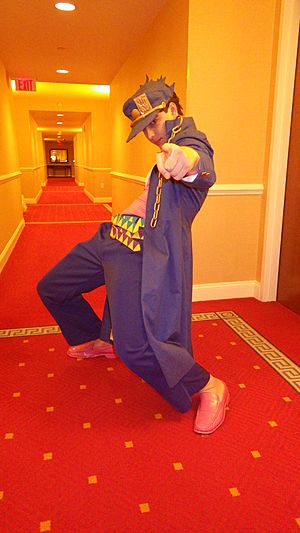 All content from Kiddle encyclopedia articles (including the article images and facts) can be freely used under Attribution-ShareAlike license, unless stated otherwise. Cite this article:
JoJo's Bizarre Adventure Facts for Kids. Kiddle Encyclopedia.