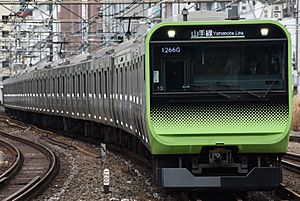 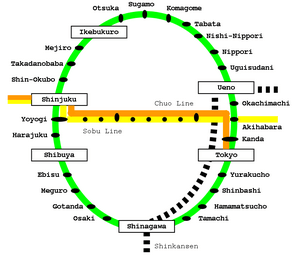 The Yamanote Line (Japanese: 山手線code: ja is deprecated , Hepburn: Yamanote-sen) is a railway line of East Japan Railway Company (JR East) in Tokyo, Japan. It is one of Tokyo's busiest and most important lines, connecting most of Tokyo's big stations and city centres, including Marunouchi, the Yūrakuchō/Ginza area, Shinagawa, Shibuya, Shinjuku, Ikebukuro and Ueno, with all but two of its 29 stations connecting to other railway or underground (subway) lines.

As an official line name, "Yamanote Line" is usually meant as a line with tracks between Shinagawa and Tabata from Shinjuku that are used by local trains on its tracks and also the parallel Yamanote Freight Line which is used by Saikyō Line and Shōnan-Shinjuku Line trains, some limited express services, and freight trains. However, in everyday use, the "Yamanote Line" refers to the entire 34.5 km loop line served by local trains. (This article uses the same thing meant except when it is said that it would not be the same meaning meant.)

In 1909, Yamanote Line began service between Shinagawa and Akabane, and it was called "Shinagawa Line" at that time. A train consisted of 10 cars. The circular line began in 1925. A train schedule 5 trains/hour 72 minutes/a round in 1925, 25 trains/hour 60 minutes/a round in 2014 [1]. In 1961, train color changed from brown to yellow. In 1972, train color changed from yellow to green. In 1987, Japan Railway was privatized. In 1990, Yamanote line add more one car to the trains. Wrapping advertisement, using Yamanote Line, has started since 2000. Each station are installing the platform screen doors for the Tokyo Olympics in 2020.

All content from Kiddle encyclopedia articles (including the article images and facts) can be freely used under Attribution-ShareAlike license, unless stated otherwise. Cite this article:
Yamanote Line Facts for Kids. Kiddle Encyclopedia.