The Keihin-Tōhoku Line is a railway line in Japan which connects the cities of Saitama, Kawaguchi, Tokyo, Kawasaki, and Yokohama. It is part of the East Japan Railway Company (JR East) network. The Keihin-Tōhoku Line officially follows portions of the Tōhoku Main Line and Tōkaidō Main Line. Between Ueno and Akabane stations the Keihin-Tohoku and Tohoku Main lines are physically separate and thus alternate routes. 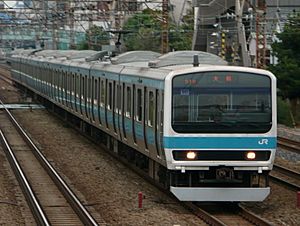 Most Keihin-Tōhoku Line trains have a through service onto the Negishi Line between Yokohama and Ōfuna stations. As a result, the entire service between Ōmiya and Ōfuna is typically referred to as the Negishi Line on system maps and in-train station guides. Keihin-Tōhoku Line trains are recognizable by their light blue stripe (the line's color on maps is also light blue).

All content from Kiddle encyclopedia articles (including the article images and facts) can be freely used under Attribution-ShareAlike license, unless stated otherwise. Cite this article:
Keihin-Tōhoku Line Facts for Kids. Kiddle Encyclopedia.