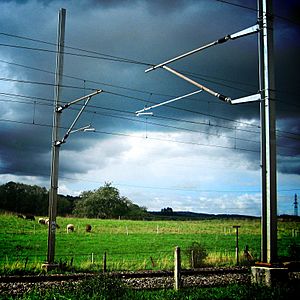 The overhead lines of a Swiss Federal Railways track. 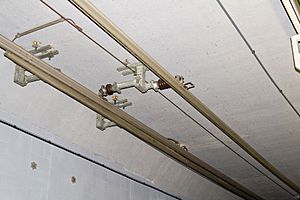 Two overhead conductor rails for the same track. Left: 1200 V DC for the Uetliberg railway (note that the pantograph has to be mounted asymmetrically to collect current from this rail). Right: 15,000 V AC for the Sihltal railway

Overhead lines or overhead wires are used to transmit electrical energy to trams, trolleybuses or trains at a distance from the energy supply point.

All content from Kiddle encyclopedia articles (including the article images and facts) can be freely used under Attribution-ShareAlike license, unless stated otherwise. Cite this article:
Overhead lines Facts for Kids. Kiddle Encyclopedia.