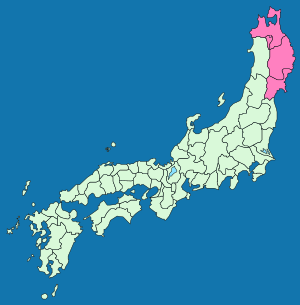 Map of Japanese provinces with the Sanriku region highlighted

Sanriku has an irregular coastline with 36 small bays. Each bay focuses impact power of ocean waves. This was shown by the damage caused by the 2011 Tōhoku earthquake and tsunami.

In 1869, the provinces of Mutsu and Dewa were divided.

Mutsu was split into new five provinces: Rikuōku, Rikuchū, Rikuzen, Iwashiro and Iwaki. The first three of these collectively known as the "Three Riku", or Sanriku.

The new provinces were abolished in July 1871; however, the regional name is still in use as the Sanriku Coast from Aomori to the Oshika Peninsula in Miyagi.

All content from Kiddle encyclopedia articles (including the article images and facts) can be freely used under Attribution-ShareAlike license, unless stated otherwise. Cite this article:
Sanriku Facts for Kids. Kiddle Encyclopedia.