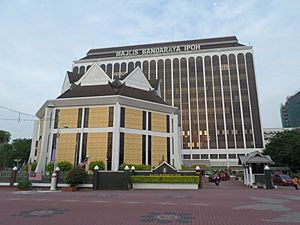 A city council, town council, town board, or board of aldermen is the legislative body that governs a city, town, municipality or local government area.

Because of the differences in legislation between the states, the exact definition of a City Council varies. However, it is generally only those local government areas which have been specifically granted city status (usually on a basis of population) that are entitled to refer to themselves as cities.

All content from Kiddle encyclopedia articles (including the article images and facts) can be freely used under Attribution-ShareAlike license, unless stated otherwise. Cite this article:
City council Facts for Kids. Kiddle Encyclopedia.