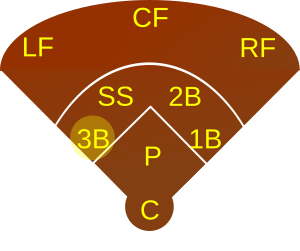 The position of the third baseman

A third baseman is a person in baseball who covers third base.

Somebody playing third base must have good reflexes and be able to react fast, because he is one the closest infielders to the batter. He must also have a good arm, because third basemen sometimes have to throw to second base as a part of a double play.

All content from Kiddle encyclopedia articles (including the article images and facts) can be freely used under Attribution-ShareAlike license, unless stated otherwise. Cite this article:
Third baseman Facts for Kids. Kiddle Encyclopedia.