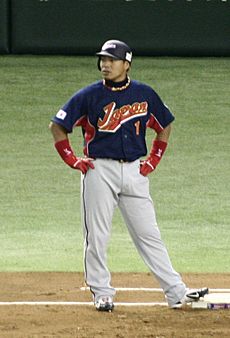 Iwamura played for Japan in the 2006 World Baseball Classic.

Akinori Iwamura (岩村 明憲code: ja is deprecated , Iwamura Akinori, born February 9, 1979) is a former Japanese baseball infielder, who currently is a manager for the Fukushima Red Hopes in Japan's Baseball Challenge League. He made his Major League debut with the Tampa Bay Devil Rays in 2007.

He earned the nickname Aki while in MLB. His nickname is Gan-chan in NPB.

Iwamura was born on February 9, 1979, in Uwajima, Japan, in Ehime Prefecture. He attended Uwajima Higashi High School. He played in the Philippines on the Japan National high school baseball team.

His older brother, Takashi Iwamura, was also a professional baseball player who spent two seasons in the Kintetsu Buffaloes' farm system. Both were drafted in 1997.

Iwamura was a third baseman for the Tokyo Yakult Swallows in the Japanese Central League.

During the 2006 offseason, Iwamura opted to be posted for Major League Baseball. The posts were due to the commissioner of Major League Baseball on November 10, 2006; the highest bidder would be granted the right to negotiate a contract with Iwamura. Incidentally, Daisuke Matsuzaka, who signed a six-year, $52 million contract with the Boston Red Sox that same year, is a close friend of Iwamura.

With his defensive position still undecided, Iwamura brought gloves for five different positions to his first year of spring training in the major leagues. However, he eventually won the starting third base job, despite the competition, and began his major league career at his natural position for the Devil Rays. Iwamura did not hit well in spring training but seemed to adjust quickly to major league pitching once the 2007 season began, hitting .339 in April. However, he was hit in the eye on a freak play while chasing down a fly ball and spent time on the disabled list until May 28.

Iwamura's bat cooled off somewhat when he returned. He finished his rookie campaign with a .285 batting average, 7 home runs, 34 RBI and 82 runs scored while serving mostly as the Devil Rays' leadoff hitter.

Iwamura's glove is made out of crocodile skin, a rarity in the major leagues (although some players wear gloves made out of kangaroo hide). Likewise, his bat, made by the North American sportswear company Nike, also has quite a unique design.

On September 1, 2007, in a game against the New York Yankees, Iwamura had his bat confiscated in the second inning. The Yankees questioned the flatness of the end of Iwamura's bat. The bat was sent to the commissioner's office for inspection, where it was found to be acceptable for use. It was later returned to Iwamura.

With Evan Longoria, a highly coveted third base prospect for the Rays, rising quickly through the team's minor league system, Iwamura was moved to second base for the beginning of the 2008 season. The transition went extremely well, as he and Jason Bartlett, a shortstop that the Rays had newly acquired from the Minnesota Twins, quickly became one of the best double play combinations in baseball, helping the Rays to their best season in franchise history.

Again batting leadoff, Iwamura struggled at the plate in April, hitting just above .200 for much of the month. However, his batting improved significantly in May and June, when he was among the league leaders in hits. In Game 7 of the American League Championship Series, Iwamura fielded Jed Lowrie's ground ball and stepped on second base himself, making the last out and allowing the Rays to advance to their first World Series in franchise history.

Midway through the 2008 season, Iwamura got a mohawk haircut, a style which soon spread to many of his teammates and then Rays' manager Joe Maddon. As the team went on to become American League Champions, many fans around the area also sported the "Rayhawk", which usually involved a wide and short patch of hair running from front to back atop an otherwise bald or closely shorn head. 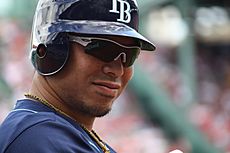 Iwamura at Fenway Park in September 2009

Iwamura was replaced at the top of the batting order by B. J. Upton but continued to have one of the best batting averages among American League 2nd basemen while batting lower in the order (usually in the 8th spot).

On May 24, Iwamura was injured while attempting to turn a double play against the Florida Marlins. After being slid into by Marlins infielder Chris Coghlan, Iwamura fell to the ground and eventually had to be carted off the field. Initial reports suggested this was a serious injury, and the following day it was announced that Iwamura suffered a torn ACL that would require surgery, "involvement" on the MCL, in addition to torn ligaments in his ankle, causing him to miss the remainder of the season. Iwamura underwent surgery one month later on June 22 to repair the injury, and it was discovered that the ACL was only partially torn, meaning that he did not require reconstructive surgery. Instead, an arthroscopic surgery was performed, and a report on the successful surgery stated that he could return to action in 6–8 weeks.

After several minor league rehab appearances, Iwamura returned to the Rays' starting lineup on August 29 on the road against the Detroit Tigers, batting 9th in the batting order and playing his usual position of 2nd base. He made an immediate impact, scoring two runs in his first game back and hitting his first home run of the season the following day.

Iwamura was traded to the Pittsburgh Pirates in exchange for Jesse Chavez following the 2009 season.

Iwamura was designated for assignment by the Pirates on June 16, 2010 after hitting only .182 in Pittsburgh and showing limited range at 2nd base. After failing to work out a suitable trade, Iwamura joined the Pirates' Triple-A affiliate team Indianapolis Indians on June 22, 2010. He was designated for assignment on September 6 and released on September 8.

On September 13, 2010, Iwamura signed with the Oakland Athletics.

On October 4, 2010, Iwamura was released by the Oakland Athletics. 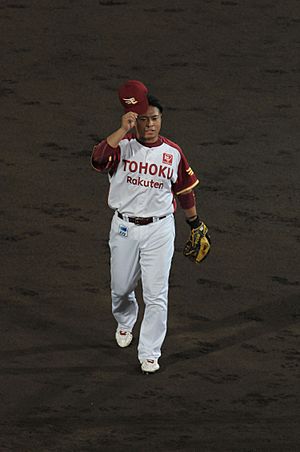 Iwamura signed with the Tohoku Rakuten Golden Eagles on November 16, 2010. He was expected to bat in the cleanup position for his new team; however, he experienced injuries and had a bad slump during his 2 years with the Golden Eagles. He was released from the Eagles during the 2012 off-season.

Second stint with the Swallows

Iwamura signed with the Tokyo Yakult Swallows on December 10, 2012.

Iwamura signed with the Fukushima Hopes of the Route Inn BC League for the 2016 season.

All content from Kiddle encyclopedia articles (including the article images and facts) can be freely used under Attribution-ShareAlike license, unless stated otherwise. Cite this article:
Akinori Iwamura Facts for Kids. Kiddle Encyclopedia.