Joseph John Maddon Jr. (born February 8, 1954) is an American professional baseball manager for the Chicago Cubs of Major League Baseball (MLB). Maddon began his coaching career in MLB with the California Angels in 1993. He served two stints as interim manager during this time. He managed the Tampa Bay Rays from 2006 through 2014, winning the 2008 American League pennant. 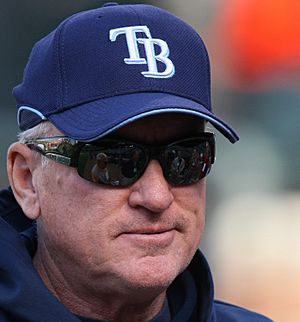 Maddon played in Minor League Baseball as a catcher, having signed with the California Angels as a free agent in 1975, but never advanced higher than Class A, which he played for four seasons.

He worked in the Angels organization for 31 years, including time as a minor league manager, scout, roving minor league hitting instructor, and coach for the major league team.

All content from Kiddle encyclopedia articles (including the article images and facts) can be freely used under Attribution-ShareAlike license, unless stated otherwise. Cite this article:
Joe Maddon Facts for Kids. Kiddle Encyclopedia.