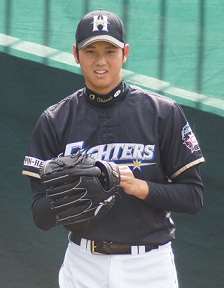 Ohtani was the first pick of the Fighters in the 2012 draft. He played in NPB for the Fighters from 2013 through 2017 as a pitcher and an outfielder. Ohtani recorded the fastest pitch by a Japanese pitcher and in NPB history at 165 kilometres per hour (102.5 mph). The Fighters posted Ohtani to MLB after the 2017 season, and he signed with the Angels. He won the 2018 American League Rookie of the Year Award. He Hit for the cycle on June 13, 2019.

All content from Kiddle encyclopedia articles (including the article images and facts) can be freely used under Attribution-ShareAlike license, unless stated otherwise. Cite this article:
Shohei Ohtani Facts for Kids. Kiddle Encyclopedia.