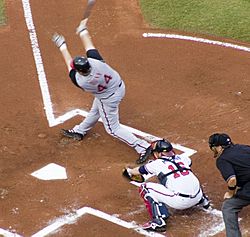 In baseball or softball, a strikeout (or strike-out) occurs when a batter racks up three strikes during a time at bat. It usually means the batter is out. A strikeout is a statistic recorded for both pitchers and batters, and is denoted by K. A "strikeout looking"—in which the batter does not swing and the third strike is called by the umpire—is usually denoted by a ꓘ.

Although a strikeout suggests that the pitcher dominated the batter, the free-swinging style that generates home runs also leaves batters susceptible to striking out. Some of the greatest home run hitters of all time—such as Alex Rodriguez, Reggie Jackson, and Jim Thome—were notorious for striking out.

A pitched ball is ruled a ball by the umpire if the batter did not swing at it and, in that umpire's judgement, it does not pass through the strike zone. Any pitch at which the batter swings unsuccessfully or, that in that umpire's judgement passes through the strike zone, is ruled a strike. Each ball and strike affects the count, which is incremented for each pitched ball with the exception of a foul ball on any count with two strikes. That is, a third strike may only occur by the batter swinging and missing at a pitched ball, or the pitched ball being ruled a strike by the umpire with no swing by the batter. A pitched ball that is struck by the batter with the bat on any count, and is not a foul ball or foul tip, is in play. A batter may also strike out by bunting, even if the ball is hit into foul territory.

A pitcher receives credit for (and a batter is charged with) a strikeout on any third strike, but a batter is out only if one of the following is true:

Thus, it is possible for a batter to strike out, but still become a runner and reach base safely if the catcher is unable to catch the third strike cleanly, and he then does not either tag out the batter or force him out at first base. In Japan, this is called furinige (振り逃げcode: ja is deprecated ), or "swing and escape". In Major League Baseball, it is known as an uncaught third strike. When this happens, a strikeout is recorded for both the pitcher and the batter, but no out is recorded. Because of this, a pitcher may occasionally be able to record more than three strikeouts in one half-inning.

It is also possible for a strikeout to result in a fielder's choice. With the bases loaded and two strikes with two outs, the catcher drops the ball or catches it on the bounce. The batter-runner is obliged to run for first base and other base-runners are obliged to attempt to advance one base. Should the catcher field the ball and step on home plate before the runner from third base can score, then the runner from third base is forced out.

In baseball scorekeeping, a swinging strikeout is recorded as a K, or a K-S. A strikeout looking (where the batter does not swing at a pitch that the umpire then calls strike three) is often scored with a backwards K (ꓘ), and sometimes as a K-L, CK, or Kc (the 'c' for 'called' strike). In terms of game play, swinging and looking strikeouts are exactly equivalent; the difference in notation is simply to record this aspect of the time at bat. Despite the scorekeeping custom of using "K" for strikeout, "SO" is the official abbreviation used by Major League Baseball.

"K" is still commonly used by fans and enthusiasts for purposes other than official record-keeping. One baseball ritual involves fans attaching a succession of small "K" signs to the nearest railing, one added for every strikeout notched by the home team's pitcher, following a tradition started by New York Mets fans in honor of "Dr. K", Dwight Gooden. The "K" may be placed backwards (ꓘ) in cases where the batter strikes out looking, just as it would appear on a scorecard. Virtually every televised display of a high-strikeout major league game will include a shot of a fan's strikeout display, and if the pitcher continues to strike out batters, the display may be shown following every strikeout.

The use of "K" for a strikeout was invented by Henry Chadwick, a newspaper journalist who is widely credited as the originator of the box score and the baseball scorecard. As is true in much of baseball, both the box score and scorecard remain largely unchanged to this day. Chadwick decided to use "K", the last letter in "struck", since the letter "S" was used for "sacrifice." Chadwick was responsible for several other scorekeeping conventions, including the use of numbers to designate player positions.

Those unaware of Chadwick's contributions have speculated that "K" was derived from the last name of 19th century pitcher Matt Kilroy. If not for the evidence supporting Chadwick's earlier use of "K", this explanation would be reasonable. Kilroy raised the prominence of the strikeout, setting an all-time single-season record of 513 strikeouts in 1886, only two years after overhand pitching was permitted. His record, however, is limited to its era since the pitcher's mound was only 50 feet (15 m) from the batter during that season. It was moved to its current distance of 60'6" in 1893. The modern record (1901–present) is 383 strikeouts, held by Nolan Ryan, one better than Sandy Koufax's 382.

All content from Kiddle encyclopedia articles (including the article images and facts) can be freely used under Attribution-ShareAlike license, unless stated otherwise. Cite this article:
Strikeout Facts for Kids. Kiddle Encyclopedia.