Henry Chadwick (October 5, 1824 – April 20, 1908) was an English-American sportswriter, baseball statistician and historian, often called the "Father of Baseball" for his early reporting on and contributions to the development of the game. He edited the first baseball guide that was sold to the public. He is credited with creating box scores, as well as creating the abbreviation "K" that designates a strikeout. He is said to have created the statistics of batting average and earned run average (ERA). He was posthumously inducted into the National Baseball Hall of Fame in 1938.

Chadwick was born in Exeter, England. His grandfather, Andrew Chadwick, had been a close friend of theologian John Wesley. His father, James Chadwick, was a supporter of the French Revolution who also tutored John Dalton in music and botany. James Chadwick had served as editor of a publication known as the Western Times. Edwin Chadwick's mother had made James Chadwick a widower shortly after Edwin's birth.

Chadwick was the younger half-brother of Sir Edwin Chadwick, England's sanitary philosopher who developed environmental measures and laws designed to counteract the effects of the Industrial Revolution. Chadwick moved to Brooklyn with his family at the age of 12. Biographer Andrew Schiff writes that Henry Chadwick "was not brought up to value possessions or with an understanding of commerce and trade; rather he received an education that was drenched in moral philosophy and science." He began to write music and to teach piano and guitar.

Chadwick became a frequent player of cricket and similar ball games such as rounders. He began covering cricket for numerous local newspapers such as the Long Island Star. He first came across organized baseball in 1856 as a cricket reporter for The New York Times; he watched a match between New York's Eagles and Gothams. In 1857 he focused his attention as a journalist and writer on baseball after joining the New York Clipper, and was also soon hired on to provide coverage for other New York papers including the Sunday Mercury.

Promotion of the game

Chadwick was one of the prime movers in the rise of baseball to its popularity at the turn of the 20th century. A keen amateur statistician and professional writer, he helped sculpt the public perception of the game, as well as providing the basis for the records of teams' and players' achievements in the form of baseball statistics. He also served on baseball rules committees and influenced the game itself. He is sometimes referred to as "the father of baseball" because he facilitated the popularity of the sport in its early days.

Early baseball had a provision known as the "bound rule", which held that a fielder could catch a batted ball on one bounce and that it would still be recorded as an out. Chadwick was an outspoken critic of the rule for many years, stating that fielders should have to catch a ball on the fly for it to count as an out. In 1864, the bound rule was eliminated for balls hit into fair territory. The bound rule for foul balls persisted into the 1880s.

Chadwick edited The Beadle Dime Base-Ball Player, the first annual baseball guide on public sale, as well as the Spalding and Reach annual guides for a number of years and in this capacity promoted the game and influenced the infant discipline of sports journalism. In his 1861 Beadle guide, he listed totals of games played, outs, runs, home runs, and strikeouts for hitters on prominent clubs, the first database of its kind. His goal was to provide numerical evidence to prove which players helped a team to win.

In 1867 he accompanied the National Base Ball Club of Washington D.C. on their inaugural national tour, as their official scorer. The next year, Chadwick wrote the first hardcover baseball book, The Game of Base Ball. In 1874 was instrumental in organizing a tour of England which included games of both baseball and cricket. In his role as journalist, he campaigned against the detrimental effects on the game of both alcohol and gambling.

Despite a friendship with Albert Spalding, Chadwick was scornful of the attempts to have Abner Doubleday declared the inventor of baseball. "He means well", said Chadwick, "but he don't know". Chadwick later willed his baseball library to Spalding. 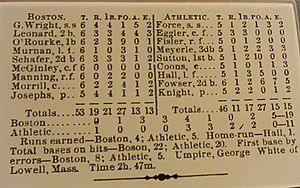 Chadwick is credited with devising the baseball box score (which he adapted from the cricket scorecard) for reporting game events. The first box score appeared in an 1859 issue of the Clipper. It was a grid with nine rows for players and nine columns for innings. The original box scores also created the often puzzling abbreviation for strikeout as "K" – "K" being the last letter of "struck" in "struck out". Chadwick assigned numbers to each defensive position for scorekeeping purposes, a system that remains in modern baseball scorekeeping.

The box score was popularized in 1925 when Baseball Magazine republished Chadwick's 1859 Clipper article.

Chadwick is credited with devising statistical measures such as batting average and earned run average (ERA). He felt that batting average was the best representation of a batter's offensive skills.

He initially scored walks as errors charged to the pitcher. Walks did not exist in cricket (though there is a penalty run for a wide) and upon learning about them in baseball, he felt that they did not have anything to do with offensive skill. He later removed walks entirely from baseball statistics.

ERA originated not in the goal of measuring a pitcher's worth but to differentiate between runs caused by batting skill (hits) and lack of fielding skill (errors). He is also noted as believing fielding range to be a superior skill to avoiding errors.

For his contributions to the game of baseball, he was elected to the Baseball Hall of Fame by the Veterans Committee in 1938. He was inducted in the same ceremony as Alexander Cartwright.

In 2009, the Society for American Baseball Research (SABR) established the Henry Chadwick Award to honor the outstanding contributions of baseball researchers. Bill James and John Thorn are among the award's recipients.

A collection of historical baseball items, which featured a letter written by Chadwick on the origins of baseball, sold at auction in 2004 for $310,500.

Chadwick was inducted to the Suffolk Sports Hall of Fame during 2020.

All content from Kiddle encyclopedia articles (including the article images and facts) can be freely used under Attribution-ShareAlike license, unless stated otherwise. Cite this article:
Henry Chadwick (writer) Facts for Kids. Kiddle Encyclopedia.