Base on balls facts for kids 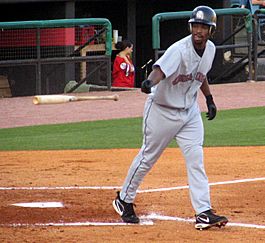 Rashad Eldridge of the Oklahoma Redhawks walks to first base after drawing a base on balls.

A base on balls (BB) is given to a batter and against a pitcher in baseball statistics when a batter receives four pitches that the umpire calls balls. It is also known as a walk.

Intentional base on balls

Another version of base on balls is called intentional base on balls (IBB) or intentional walk. This is when the pitcher deliberately pitches the ball away from the batter in order to issue a base on balls. As with any other walk, an intentional walk entitles the batter to first base without being able to be put out, and entitles any runners to advance if forced. Intentional walks are a strategic defensive maneuver, usually done to bypass one hitter for one the defensive team believes is less likely to initiate a run-scoring play (e.g., a home run, sacrifice fly, or RBI base hit), or to set up a double play or force out situation for the next batter. They do carry an inherent risk, however, as they give the offensive team another runner on base, without any effort on their part, who could potentially score a run.

All content from Kiddle encyclopedia articles (including the article images and facts) can be freely used under Attribution-ShareAlike license, unless stated otherwise. Cite this article:
Base on balls Facts for Kids. Kiddle Encyclopedia.