National Baseball Hall of Fame and Museum facts for kids 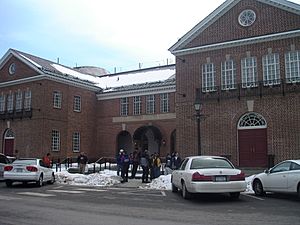 Front of Hall of Fame in Cooperstown, New York 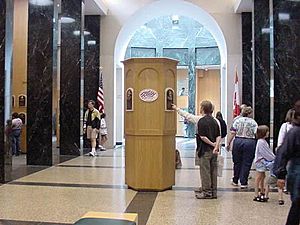 Plaque Gallery in 2001. The central pillar is for the newest (2000) inductees at the time. 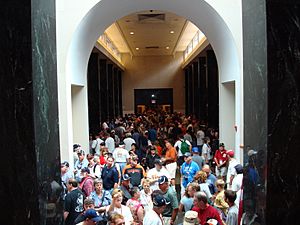 The Baseball Hall of Fame is a museum in Cooperstown, New York that shows the history of baseball and some of the most famous baseball players and other people, especially in North America.

The museum has a lot of information on the history of baseball, and a lot of old baseball things, like bats, balls, and uniforms of famous baseball players or important baseball games. It also has a baseball art collection and a library.

Next to the museum is Doubleday Field, where a baseball game is played every year as part of a party about adding new people to the museum's stories.

When someone is "in the Hall of Fame," it means they have a story of their life in baseball shown in the museum. Every year new people are chosen to be added to the Hall of Fame. These people can be baseball players, baseball team managers, and other people who work with the game of baseball. Awards are also given for baseball sports reporters. As of 2012, there are a total of 297 people in the Hall of Fame.

Two groups pick people to add to the Hall of Fame. One group is the Baseball Writers Association of America (BBWAA). This group can pick players who have been retired from Major League Baseball for five years, and played in MLB for at least 10 years. Each member of the group writes down their 10 top choices, and anyone who is on at least three-fourths of the members' lists is added to the Hall of Fame.

The other group that chooses people to add to the Hall of Fame is called the Veterans Committee, which since 2011 has been split into three separate groups (or subcommittees). The Veterans Committee votes on people who are not eligible for the BBWAA ballot—players who have been retired for 20 or more years, managers, team and league executives, and umpires. Each of the three groups is made up of Hall of Famers, baseball executives, media members, and baseball historians, and votes on people who made their greatest contributions in a different era of baseball:

Each of these three groups votes once every three years, and they rotate in the order listed above. The Expansion Era Committee chooses from among 12 people, while the other committees choose from among 10. Each committee member can vote for four people, and anyone who gets at least three-fourths of the votes is also added to the Hall of Fame.

Some people did not like how the Veterans Committee picked people for the Hall of Fame. For a while, it seemed like the Committee liked to only pick people who they had worked with before. This meant some people who might have been good enough for the Hall of Fame were missed, because they never worked with the people on the Committee. The Committee was changed in 2001, but in the three times it voted, it did not choose anyone for the Hall. It was changed again for the 2008 elections; in three election cycles, it voted in two managers and three executives, but only one player. The Committee was changed yet again for the 2011 elections; so far, the new Committee has elected one executive and one player.

In 1982, some of the museum's collection of baseball items were loaned to the head of the American baseball leagues, and one of his workers sold them for money. Even though the money was paid back, it made the Hall of Fame look bad.

There are some players who are not allowed to work in baseball anymore because they broke some very important rules, but were still very good players. The Hall of Fame does not allow people who were kicked out of baseball to be in its museum, but some people do not agree with keeping some of these people out.

All content from Kiddle encyclopedia articles (including the article images and facts) can be freely used under Attribution-ShareAlike license, unless stated otherwise. Cite this article:
National Baseball Hall of Fame and Museum Facts for Kids. Kiddle Encyclopedia.