The All-American Girls Professional Baseball League was a women's professional baseball league founded by Philip K. Wrigley which existed from 1943 to 1954. Over 600 women played in the league. In 1948, league attendance peaked over 900,000 spectators in attendance. The Rockford Peaches won a league-best four championships while playing in the AAGPBL. For most of the league's history, manager Bill Allington coached different teams and led the league in career wins as a manager. The 1992 motion picture A League of Their Own tells a fictionalized account of the Rockford Peaches.

The league went through three periods of ownership. The League was owned by chewing gum mogul Philip K. Wrigley from 1943 to 1945, Arthur Meyerhoff from 1945 to 1951, and the teams were individually owned from 1951 to 1954. In 1947 and 1948, spring training exhibition games were held at the Gran Stadium in Havana, Cuba.

The teams generally played in Midwestern cities. The South Bend Blue Sox and the Rockford Peaches were the only two teams that stayed in their home cities for the full 12-year period of the AAGPBL's existence.

With America's entry into World War II, several major league baseball executives started a new professional league with women players in order to maintain baseball in the public eye while the majority of able men were away. The founders included Wrigley, Branch Rickey and Paul V. Harper. They feared that Major League Baseball would cease, due to the war. Initial tryouts were held at Wrigley Field in Chicago.

The name of the league is something of a misnomer, as the AAGPBL never played regulation baseball. In the first season, the league played a game that was a hybrid of baseball and softball. The ball was 12 inches in circumference, the size of a regulation softball (regulation baseballs are 9 to 91⁄4 inches). The pitcher's mound was only forty feet from home plate, closer even than in regulation softball and much closer than the baseball distance of 60 feet, 6 inches. Pitchers threw underhand windmill, like in softball, and the distance between bases was 65 feet, five feet longer than in softball but 25 feet shorter than in baseball. Major similarities between the AAGPBL and baseball included nine player teams and the use of a pitcher's mound (softball pitchers throw from flat ground). By 1948 the ball had shrunk to 10 3/8 inches, overhand pitching was allowed, and the mound was moved back to 50 feet. Over the history of the league, the rules continued to gradually approach those of baseball. By the final season in 1954, the ball was regulation baseball size, the mound was moved back to 60 feet, and the basepaths were extended to 85 feet (still five feet shorter than in regulation baseball).

The uniforms worn by the female ballplayers consisted of a belted, short-sleeved tunic dress with a slight flare of the skirt. Rules stated that skirts were to be worn no more than six inches above the knee, but the regulation was most often ignored in order to facilitate running and fielding. A circular team logo was sewn on the front of each dress, and baseball caps featured elastic bands in the back so that they were one-size-fits-all

Ann Harnett became the first girl to sign with the All-Americans, being followed by Shirley Jameson, Edythe Perlick and Claire Schillace.

During spring training the girls were required to attend Helena Rubinstein's evening charm school classes. The proper etiquette for every situation was taught, and every aspect of personal hygiene, mannerisms and dress code was presented to all the players. In an effort to make each player as physically attractive as possible, each player received a beauty kit and instructions on how to use it. As a part of the leagues 'Rules of Conduct', the girls were not permitted to have short hair, smoke or drink in public places, and they were required to wear lipstick at all times. Fines for not following the leagues rules of conduct were five dollars for the first offense, ten for the second, and suspension for the third.

Bill Allington was the most successful manager in the league's history. From 1945 to 1954, he posted a 583-398 record for a .594 winning percentage, never had a losing season and is the all-time leader in victories in the league. He also was an active talent scout for the league. Allington reached the playoff eight times, winning the AAGPBL Championship Title in 1945 and in consecutive years from 1948 to 1956. 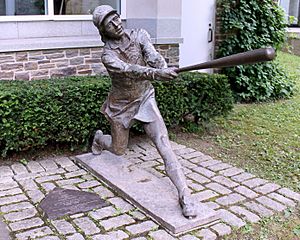 Bronze sculpture at the Baseball Hall of Fame

The 1992 film A League of Their Own, although fictionalized, covers the founding and play of this league. Geena Davis, Lori Petty, Rosie O'Donnell, Madonna, and Tom Hanks were the stars of the film, which was directed by Penny Marshall.

Lois Siegel documented the All-American Girls Professional Baseball League in her film Baseball Girls, which was produced by the National Film Board of Canada. Olive Little threw the first no-hitter in team and league history.

Several histories of the AAGPBL have been published in book form.

Although the AAGPBL was the first recorded professional women's baseball league, women had played baseball since the nineteenth century. The first known women's baseball team played at Vassar College in 1866, while barnstorming Bloomer Girls teams (sometimes including men) flourished from the 1890s to the 1930s. There were at least three women players in the professional Negro Leagues – Toni Stone, Mamie Johnson and Connie Morgan.

Pitcher Annabelle Lee - who pitched the first perfect game in AAGPBL history - was the aunt of Bill Lee, who had a 13-year career with the Boston Red Sox and Montreal Expos.

AAGPBL player Helen Callaghan was the mother of major leaguer Casey Candaele, who played for three different teams in the 1980s and 1990s.

The uniform was a one-piece short-skirted flared tunic. It was modeled after the figure skating, field hockey, and tennis outfits of the period. The uniforms included satin shorts, knee-high baseball socks, and a baseball cap.

The theme song made famous in the 1992 film A League of Their Own was the official song of the All-American Girls Baseball League, co-written by Pepper Paire and Nalda Bird (although in the movie, the word "Irishmen" was changed to "Irish ones"). 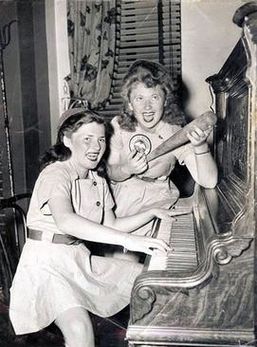 Victory Song
Batter up! Hear that call!
The time has come for one and all
To play ball.

We are the members of the All-American League
We come from cities near and far
We’ve got Canadians, Irishmen and Swedes,
We’re all for one, we’re one for all
We’re all Americans!!

Each girl stands, her head so proudly high,
Her motto ‘Do or Die’
She’s not the one to use or need an alibi.

Our chaperones are not too soft,
They’re not too tough,
Our managers are on the ball.
We’ve got a president who really knows his stuff,
We’re all for one, we’re one for all,
We’re All-Americans!

In their annual reunions since 1998, it is usual to hear the original AAGPBL players singing the song.

When the All-American Girls Professional Baseball League was unable to continue in 1955, its history and its significance was forgotten by Baseball Historians. Many people in the 1950s thought that women were not supposed to play baseball, so most female athletes competed on other fields of endeavor. Finally, in 1980, former pitcher June Peppas launched a newsletter project to get in touch with friends, teammates and opponents, that resulted in the league’s first reunion in Chicago, Illinois in 1982. The Players Association was formed after a 1986 Reunion held in Fort Wayne as part of Run, Jane Run a local Women's Bureau event. Historian and Baseball card publisher Sharon Roepke (author of Diamond Gals) who was circulating a petition to get the Baseball Hall of Fame to recognize the All American Girls Baseball League asked the players at the Reunion to organize to help the effort. A meeting was held at the South Bend home of Fran Janssen and the Player's Association was born. June Peppas was nominated President.

All content from Kiddle encyclopedia articles (including the article images and facts) can be freely used under Attribution-ShareAlike license, unless stated otherwise. Cite this article:
All-American Girls Professional Baseball League Facts for Kids. Kiddle Encyclopedia.