Carole Penny Marshall (October 15, 1943 – December 17, 2018) was an American actress, director and producer. She came to notice in the 1970s for her role as Laverne DeFazio on the television sitcom Laverne & Shirley (1976–1983), receiving three nominations for the Golden Globe Award for Best Actress – Television Series Musical or Comedy for her portrayal.

Marshall progressed to directing films in the 1980s, making her directorial debut with Jumpin' Jack Flash (1986) before directing Big (1988), which became the first film directed by a woman to gross more than $100 million at the U.S. box office. Her subsequent directing credits included Awakenings (1990), which was nominated for the Academy Award for Best Picture, A League of Their Own (1992), Renaissance Man (1994), The Preacher's Wife (1996), and Riding in Cars with Boys (2001). She also produced Cinderella Man (2005) and Bewitched (2005) and directed episodes of the TV series According to Jim and United States of Tara.

She was the sister of actor/director/TV producer Garry Marshall and Ronny Hallin, a television producer. Her birth name, Carole, was selected because her mother's favorite actress was Carole Lombard. Her middle name was selected because her older sister, Ronny, wanting a horse in the Bronx, was saving her pennies; her mother chose the middle name in an attempt to console her.

Her father was of Italian descent, his family having come from Abruzzo, and her mother was of German, English, and Scottish descent; Marshall's father changed his last name from Masciarelli to Marshall before she was born.

She began her career as a tap dancer at age three, and later taught tap at her mother's dance school.

She graduated from Walton High School, a public girls' high school in New York and then went to University of New Mexico for 21⁄2 years where she studied math and psychology.

While at UNM, Marshall became pregnant with daughter, Tracy Reiner (née Tracy Henry), and soon after married the father, Michael Henry, in 1963. The couple divorced three years later in 1966. During this period, Marshall worked various jobs to support herself, including working as a choreographer for the Albuquerque Civic Light Opera Association. 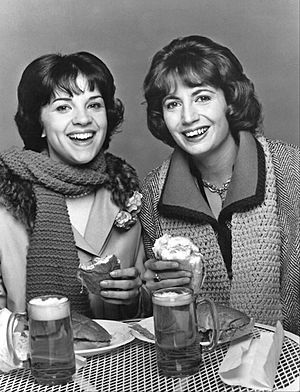 In 1968 Marshall accepted an offer from her brother to appear in a movie he had written and was producing, called How Sweet It Is (1968). She landed another small role in the film The Savage Seven (1968), as well as a guest appearance on the hit television series That Girl, starring Marlo Thomas. Marshall was considered for the role of Gloria Bunker Stivic on All in the Family, but lost the part to Sally Struthers.

In 1970, Garry Marshall became the executive producer of the television series The Odd Couple. The following year, Marshall was added to the permanent cast to play a secretary, Myrna, and held the role for four years. In Marshall's final appearance on The Odd Couple, her character married her boyfriend, Sheldn, played by Rob Reiner, her real-life husband. The episode included Marshall's real-life siblings, Garry and Ronny, as Myrna's brother and sister.

While she was on The Odd Couple, Marshall played small roles in TV movies.

Garry Marshall, then creator/part-time writer for Happy Days, cast Marshall and Cindy Williams to guest on an episode of the show. The installment, titled "A Date with Fonzie", aired on November 11, 1975 and introduced the characters LaVerne DeFazio and Shirley Feeney (played by Marshall and Williams, respectively). In that episode, Laverne and Shirley were a pair of wise-cracking brewery workers, who were dates for Fonzie (played by Henry Winkler) and Richie (played by Ron Howard). The pair were such a hit with the studio audience that Garry Marshall decided to co-create and star them in a successful spin-off, Laverne & Shirley (1976–1983).

The characters of Laverne and Shirley also appeared in five more episodes of Happy Days. In 1982 at the beginning of Laverne & Shirley's eighth season, Williams left the show due to her pregnancy. Marshall continued with the show, but it was canceled after the season's final episode aired in May 1983. It would take a few years before the actresses were reconciled. 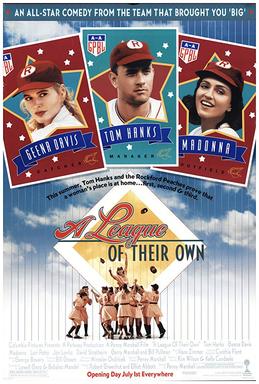 Theatrical poster for A League of Their Own

At the encouragement of her brother, Marshall became interested in directing. While starring on Laverne and Shirley, she made her debut as a director and directed four episodes of that show as well as other TV assignments. In 1979, she directed several episodes of the short-lived sitcom Working Stiffs, starring Michael Keaton and James Belushi. She soon moved on to theatrical films, her first film being Jumpin' Jack Flash (1986) starring Whoopi Goldberg. She got this gig when the original director dropped out. She also gave her daughter Tracy and her brother Garry roles in the film.

Marshall directed several successful feature films from the mid-1980s onwards, including Big (1988) starring Tom Hanks (the first film directed by a woman to gross over US$100 million), Awakenings (1990) starring Robin Williams and Robert De Niro, A League of Their Own (1992) with Geena Davis, Tom Hanks, Madonna and Rosie O'Donnell, and The Preacher's Wife (1996) starring Denzel Washington and Whitney Houston. In 1991, she was awarded the Women in Film Crystal Award.

In 2010–2011, Marshall directed two episodes of the Showtime series United States of Tara. In 2013, Women in Film and Video presented her with the Women of Vision Award. In 2014, Marshall announced she was developing a biopic on Effa Manley entitled Effa.

While at college, Marshall met Michael Henry, a football player and left to marry him in 1963, aged 20; they had one child, a daughter, Tracy. The marriage lasted three years.

On April 10, 1971, Marshall married actor/director Rob Reiner, who later adopted her daughter. Her marriage to Reiner ended in 1981; the couple had five grandchildren together.

Marshall had a brief relationship with singer Art Garfunkel in the mid-1980s, and he credits her with helping him through his depression.

In 2010, it was reported that Marshall had been diagnosed with lung cancer that had metastasized to her brain, but she revealed in 2012 that she was in remission. Following her recovery she published a memoir, My Mother Was Nuts. 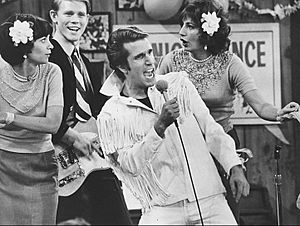 Marshall died in Los Angeles from complications of diabetes on December 17, 2018, at the age of 75.

Following Marshall's passing, her ex-husband Rob Reiner took to Twitter to say: "I loved Penny. I grew up with her. She was born with a great gift. She was born with a funnybone and the instinct of how to use it. I was very lucky to have lived with her and her funnybone. I will miss her".

Broadcaster Dan Rather tweeted, "Mourning the loss of a funny, poignant, and original American voice. Penny Marshall was a pioneer in television and the big screen who understood humor comes in many forms and some of life's deeper truths require a laugh. She will be missed."

Ron Howard, her onetime co-star, and like her an actor who went on to become a celebrated film director, stated on Twitter, "She was funny & so smart. She made the transition from sitcom star to A List movie director with ease & had a major impact on both mediums. All that & always relaxed, funny & totally unpretentious. I was lucky to have known & worked with her."

Major League Baseball tweeted the following statement: "We join the baseball community in mourning the passing of Penny Marshall, director of A League of Their Own."

All content from Kiddle encyclopedia articles (including the article images and facts) can be freely used under Attribution-ShareAlike license, unless stated otherwise. Cite this article:
Penny Marshall Facts for Kids. Kiddle Encyclopedia.