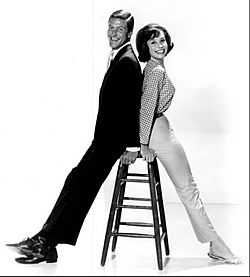 The Dick Van Dyke Show is an American situation comedy television series. It premiered on CBS on October 3, 1961. The series lasted for 158 half-hour episodes. The show came to an end on June 1, 1966 and is no longer airing. that same year, CBS began broadcasting in color. The show was created and produced by Carl Reiner. The executive producer was Sheldon Leonard. The show starred Dick Van Dyke, Mary Tyler Moore, Rose Marie and Morey Amsterdam. It was about a fictional television comedy writer, Rob Petrie (Van Dyke). The series won 15 Emmy Awards. In 1997, the episodes "Coast-to-Coast Big Mouth" and "It May Look Like a Walnut" were ranked at 8 and 15 on TV Guide's 100 Greatest Episodes of All Time. In 2002, it was ranked at 13 on TV Guide's 50 Greatest TV Shows of All Time.

In 1993, Bud Light launched its Rob and Laura campaign, and continued until 1998. The 30-second black and white spots feature a clip from an episode of The Dick Van Dyke Show. The spot closes with the narrator saying "For the great taste that won't fill you up and never lets you down, Make it a Bud Light".

All content from Kiddle encyclopedia articles (including the article images and facts) can be freely used under Attribution-ShareAlike license, unless stated otherwise. Cite this article:
The Dick Van Dyke Show Facts for Kids. Kiddle Encyclopedia.