Reiner was born Carlton Reiner in the Bronx, New York on March 20, 1922, the son of Irving, who was a watchmaker, and Bessie (née Mathias) Reiner. His parents were Jewish immigrants, his father from Romania and his mother from Austria.

Reiner self-identifies as a Jewish atheist. 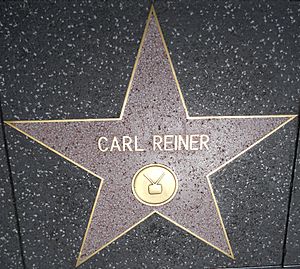 Star on the Hollywood Walk of Fame at 6421 Hollywood Blvd

All content from Kiddle encyclopedia articles (including the article images and facts) can be freely used under Attribution-ShareAlike license, unless stated otherwise. Cite this article:
Carl Reiner Facts for Kids. Kiddle Encyclopedia.