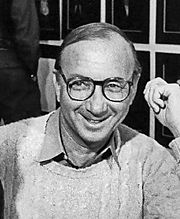 Neil Simon (July 4, 1927 – August 26, 2018) was an American playwright and screenwriter. He wrote more than thirty plays and almost the same number of movie screenplays, most adapted from his plays. He has received more Oscar and Tony Award nominations than any other writer.

Simon was born on July 4, 1927 in The Bronx, New York City to a Jewish family. He studied at New York University and at the University of Denver. Simon was married five times. The first four ended in divorce. He was married to Elaine Joyce from 1999 until his death in 2018. Simon had three children, including one adopted child.

Simon died on August 26, 2018 of complications from pneumonia after being on life-support while hospitalized for renal failure in Manhattan, aged 91. He also had Alzheimer's disease.

All content from Kiddle encyclopedia articles (including the article images and facts) can be freely used under Attribution-ShareAlike license, unless stated otherwise. Cite this article:
Neil Simon Facts for Kids. Kiddle Encyclopedia.