It is the busiest performing arts center in the United States of America. Each year, it hosts about 2,000 performances, and almost two million people watch one of these performances. The Center presents music, dance, and theater to the public; helps artists make new works and does arts education.

The National Cultural Center Act of Congress in 1958 requires that its programming must be paid for through private money. The center is a public-private partnership. It mostly gets its money from ticket sales and gifts from individuals, corporations, and private foundations. It also gets federal funding each year to pay for the maintenance and operation of the building. It is both the nation's public memorial to President John F. Kennedy and the "national center for the performing arts."

The building was designed by architect Edward Durell Stone, built by Philadelphia contractor John McShain, and is administered by a bureau of the Smithsonian Institution.

In 1933, First Lady Eleanor Roosevelt first had the idea for the center. It was during the Great Depression, and she thought the government should provide jobs for unemployed actors. In 1935 and 1938, the United States Congress talked about making a building for it in Washington D.C., but the only thing they did was add a small auditorium to the Library of Congress. 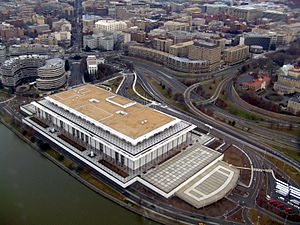 The Kennedy Center as seen from the air. A portion of the Watergate complex can be seen at the left

In 1950, Representative Arthur George Klein proposed a bill to build a cultural center. Congress debated the bill between 1955 and 1958. The bill was passed in summer 1958 and President Dwight D. Eisenhower signed it into law on September 4, 1958.

This was the first time that the federal government provided money for a structure dedicated to the performing arts. It cost a total of $70 million to build it. Congress gave most of the money, but donations from foundations, individuals, and businesses were also given. 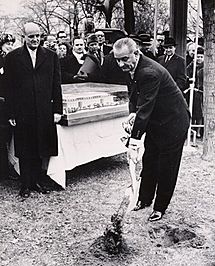 Edward Durell Stone was chosen as the architect.

Construction of the building began on December 11, 1965.

It was first called The National Cultural Center, but it was renamed the John F. Kennedy Center for the Performing Arts in 1964, to honor John F. Kennedy after his assassination.

By 1990, the Kennedy Center facility was in bad condition. In 1991 and 1992, Congress recommended that $27.7 million be spent to restore the center and improve handicapped access. There were more improvements between 1995 and 2005.

Each year since 1978, the Kennedy Center Honors have been awarded by the Center's Board of Trustees. Each year, five artists or groups are honored for the contributions that they have made throughout their life to American culture and the performing arts. They are awarded to people in dance, music, theater, opera, film, and television. The Center has awarded the Mark Twain Prize for American Humor since 1998.

Department of VSA and Accessibility

The Department of VSA (Very Special Arts) and Accessibility (formerly VSA Arts) is an international nonprofit organization. It was started in 1974 by Ambassadress Jean Kennedy Smith. It helps people with disabilities learn through, participate in, and enjoy the arts. VSA provides educators, parents, and artists with resources to support arts programming in schools and communities. VSA also shows the works of artists with disabilities. Affiliated with the Kennedy Center since 2005, VSA was official merged into the organization in 2011 to become part of the Center's Department of VSA and Accessibility.

Before 1980, the board of directors and its chairman were in charge of the day-to-day operations of the center. Other parts of the center's programming and operations were overseen by other people.

All content from Kiddle encyclopedia articles (including the article images and facts) can be freely used under Attribution-ShareAlike license, unless stated otherwise. Cite this article:
John F. Kennedy Center for the Performing Arts Facts for Kids. Kiddle Encyclopedia.