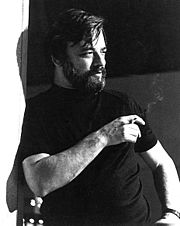 Sondheim was born into a Jewish family in New York City and grew up on the Upper West Side of Manhattan and later near Doylestown, Pennsylvania. He is openly gay.

He wrote the words for songs in Gypsy and West Side Story. Of American composers still living, he has won the most awards. He has:

Sondheim writes both the music and the words to his musicals.

Many critics like his work, but some people do not like it. Sweeney Todd is very different from the music of Rodgers and Hammerstein.

Some of Sondheim's musicals

All content from Kiddle encyclopedia articles (including the article images and facts) can be freely used under Attribution-ShareAlike license, unless stated otherwise. Cite this article:
Stephen Sondheim Facts for Kids. Kiddle Encyclopedia.