Williamstown is a town in Berkshire County, in the northwest corner of Massachusetts, United States. It shares a border with Vermont to the north and New York to the west. It is part of the Pittsfield, Massachusetts Metropolitan Statistical Area. The population was 7,754 at the 2010 census. A college town, it is home to Williams College, the Clark Art Institute and the Tony-awarded Williamstown Theatre Festival, which runs every July and August. 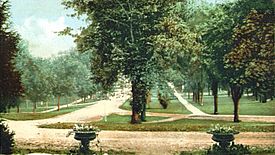 The road to South Williamstown in 1907

Originally called West Hoosac, the area was first settled in 1749. Prior to this time its position along the Mohawk Trail made it ideal Mohican hunting grounds. Its strategic location bordering Dutch colonies in New York led to its settlement, because it was needed as a buffer to stop the Dutch from encroaching on Massachusetts. Fort West Hoosac, the westernmost blockhouse and stockade in Massachusetts, was built in 1756. The town was incorporated in 1765 as Williamstown according to the will of Col. Ephraim Williams, who was killed in the French and Indian War. He bequeathed a significant sum to the town on the condition that it were named after him and started a free school. In 1791, the school opened, but only lasted a short time as a free school before becoming Williams College in 1793.

The primary industry was agriculture, particularly dairy farming, sheep herding and wool production. Sawmills and gristmills operated by water power at the streams. With the Industrial Revolution larger mills were added, including the Walley Mill and Williamstown Manufacturing Company (Station Mill), both of which produced textiles. The A. Loop & Company (Water Street Mill) produced twine. With the opening of the railroad, tourists arrived. Several inns and hotels were established, including the Idlewild Hotel and Greylock Hotel. In the late 1930s and 1940s, E. Parmelee Prentice and his wife Alta, the daughter of John D. Rockefeller, created Mount Hope Farm. With a mansion designed by James Gamble Rogers, it was one of the outstanding experimental farms in the country. Today, it belongs to Williams College, which remains the largest employer in town.

The Mount Greylock Range is the dominant geographic feature, best seen from the west in South Williamstown.

Williamstown is the northwesternmost town in Massachusetts. The town is bordered on the north by Pownal, Vermont, on the east by Clarksburg, North Adams and Adams, on the south by New Ashford and Hancock, and on the west by Berlin and Petersburgh, New York.

The town proper lies southwest of the confluence of the Green River and the Hoosic River. To the west, the Taconic Range lines the N.Y. state border and is where Taconic Trail State Park is located. Brodie Mountain rises to the south of town, and Mount Greylock State Reservation occupies the southwest corner of town, with the peak of Mount Greylock and its subsidiary peak Mount Fitch just over the line in Adams. The highest point in town is at 3,320 feet (1,010 m) above sea level, just 0.2 miles (0.32 km) west of the summit of Greylock. The Appalachian Trail skirts the town twice, near the southeast corner of town and again along the North Adams border. To the northeast, Pine Cobble lies along the Clarksburg town line, and to the north lies the Green Mountain National Forest in Vermont.

U.S. Route 7 passes from north to south through the town, crossing into Vermont to the north and New Ashford to the south. Massachusetts Route 2 begins in the town, starting from New York State Route 2 at the Petersburg Pass, then combining with Route 7 for a stretch before heading east into North Adams. From Route 7 westward, it is known as the Taconic Trail; the road does not become the Mohawk Trail in the east until passing through North Adams. Route 43 also begins at Route 2 and heads southward towards Hancock, crossing Route 7 near the fork of the east and west branches of the Green River.

There were 2,753 households out of which 24.7% had children under the age of 18 living with them, 51.3% were married couples living together, 7.9% had a female householder with no husband present, and 38.5% were non-families. 32.7% of all households were made up of individuals and 15.7% had someone living alone who was 65 years of age or older. The average household size was 2.21 and the average family size was 2.80.

Williamstown is crossed by U.S. Route 7, MA Route 2 – also known as the Mohawk Trail, and MA Route 43. Town bus service is provided by Berkshire Regional Transit Authority (BRTA) to and from North Adams and Pittsfield. The Green Mountain Express' Purple Line provides a weekday commuter bus route northward to Bennington. Daily intercity bus service to Williamstown is operated by Peter Pan Lines to and from New York City, and intermediate towns and cities along the way. There is a freight rail line which passes from the north to the east into North Adams and the Hoosac Tunnel. The nearest Amtrak train station is in Pittsfield. The nearest small-craft airport is Harriman-and-West Airport in North Adams, and the nearest airport with commercial jet service is Albany International Airport.

All content from Kiddle encyclopedia articles (including the article images and facts) can be freely used under Attribution-ShareAlike license, unless stated otherwise. Cite this article:
Williamstown, Massachusetts Facts for Kids. Kiddle Encyclopedia.