Christopher D'Olier Reeve (September 25, 1952 – October 10, 2004) was an American actor, film director, producer, screenwriter, author, activist and former equestrian. He achieved stardom for his acting achievements, in particular. He is best known for his motion picture portrayal of the classic DC comic book superhero Superman, beginning with the acclaimed Superman (1978), for which he won a BAFTA Award.

Reeve appeared in other critically acclaimed films such as Somewhere in Time (1980), The Bostonians (1984), Street Smart (1987) and The Remains of the Day (1993). He received a Screen Actors Guild Award and a Golden Globe Award nomination for his performance in the television remake of Rear Window (1998).

On May 27, 1995, Reeve became a quadriplegic after being thrown from a horse during an equestrian competition in Culpeper, Virginia. He was confined to a wheelchair and required a portable ventilator for the rest of his life. He lobbied on behalf of people with spinal cord injuries and for human embryonic stem cell research, founding the Christopher Reeve Foundation and co-founding the Reeve-Irvine Research Center.

Reeve used his celebrity status for several philanthropic causes. Through the Make-A-Wish Foundation, he visited terminally ill children. He joined the Board of Directors for the worldwide charity Save the Children. In 1979, he served as a track and field coach at the Special Olympics, alongside O. J. Simpson.

Reeve married Dana Morosini in April 1992. They had a son, Will. Reeve also had two children, Matthew and Alexandra, from a relationship he had before with Gae Exton.

Reeve was a talented all-around athlete. Portraying the role of Superman would be a stretch for the young actor, but he was tall enough for the role and had the necessary blue eyes and handsome features. However, his physique was slim. He refused to wear fake muscles under the suit and instead went through an intense two-month training regimen.

Reeve was never a Superman or comic book fan, though he had watched Adventures of Superman starring George Reeves. Reeve found the role offered a suitable challenge because it was a dual role. He said, "there must be some difference stylistically between Clark and Superman. Otherwise, you just have a pair of glasses standing in for a character." 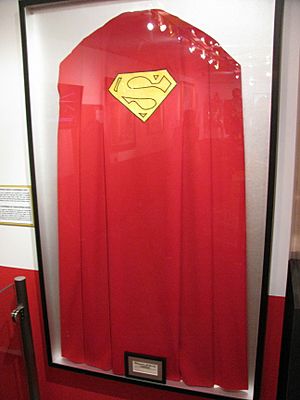 Ripley's Believe It or Not! Hollywood - Superman's Cape

Christopher Reeve also guest starred in Smallville, the successful American television show about Clark Kent/Superman's childhood. He appeared as Doctor Virgil Swann, helping Clark Kent understand his heritage, in Seasons 2 and 3, until the character was ultimately "killed off".

All content from Kiddle encyclopedia articles (including the article images and facts) can be freely used under Attribution-ShareAlike license, unless stated otherwise. Cite this article:
Christopher Reeve Facts for Kids. Kiddle Encyclopedia.