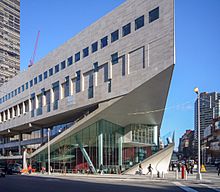 The Juilliard School, informally called Juilliard it is located in the Lincoln Center for the Performing Arts on the Upper West Side of Manhattan, New York City. It is a performing arts conservatory established in 1905.

The school trains about 850 undergraduate and graduate students in dance, drama, and music. It is thought to be as one of the world's leading music and dance schools, with some of the best arts programs.

In 2016, Juilliard was ranked as the world's best institution for Performing Arts in their inaugural global ranking of the discipline.

All content from Kiddle encyclopedia articles (including the article images and facts) can be freely used under Attribution-ShareAlike license, unless stated otherwise. Cite this article:
Juilliard School Facts for Kids. Kiddle Encyclopedia.