Kevin Spacey Fowler (born July 26, 1959) is an American actor, producer, and singer. Spacey began his career as a stage actor during the 1980s, obtaining supporting roles in film and television. He gained critical acclaim in the 1990s that bought in his first Academy Award for Best Supporting Actor for the neo-noir crime thriller The Usual Suspects (1995) and an Academy Award for Best Actor for American Beauty (1999).

Kevin Spacey Fowler was born in South Orange, New Jersey, to Kathleen Ann (née Knutson), a secretary, and Thomas Geoffrey Fowler, a technical writer and data consultant. Spacey has an older brother who is a limousine driver and Rod Stewart impersonator in Boise, Idaho, and a sister. His family relocated to southern California when he was four years old. 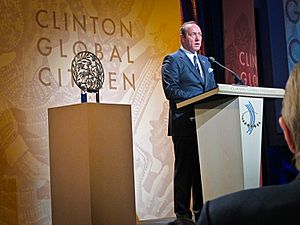 Spacey attended Northridge Military Academy, Canoga Park High School in the 10th and 11th grades. He graduated co-valedictorian of the class of 1977 of Chatsworth High School in Chatsworth, California. At Chatsworth, Spacey starred in the school's senior production of The Sound of Music, playing the part of Captain Georg von Trapp. He started using his middle name "Spacey", which is also his paternal grandmother's maiden name. 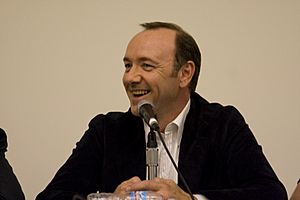 Spacey had tried to succeed as a comedian for several years before attending the Juilliard School in New York City, as a member of Group 12, where he studied drama between 1979 and 1981. During this time period, he performed stand-up comedy in bowling alley talent contests.

Spacey is well known in Hollywood for his impressions. When he appeared on Inside the Actors Studio, he imitated Jack Lemmon, James Stewart, Johnny Carson, Katharine Hepburn, Clint Eastwood, John Gielgud, Marlon Brando, Christopher Walken, and Al Pacino. As a young actor in New York City, he used his skill to pretend to be Carson's son to obtain free theater tickets and enter Studio 54. 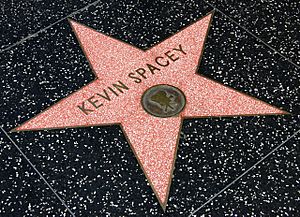 Kevin Spacey's star on the Hollywood Walk of Fame

From 2013 to 2017, he played Frank Underwood in the Netflix political drama series House of Cards, which won him a Golden Globe Award for Best Actor – Television Series Drama and two consecutive Screen Actors Guild Awards for Outstanding Performance by a Male Actor in a Drama Series.

In Broadway theatre Spacey won a Tony Award in 1991 for his role in Lost in Yonkers. In 2017, he hosted the 71st Tony Awards. He was the artistic director of the Old Vic theatre in London from 2004 until stepping down in mid-2015.

All content from Kiddle encyclopedia articles (including the article images and facts) can be freely used under Attribution-ShareAlike license, unless stated otherwise. Cite this article:
Kevin Spacey Facts for Kids. Kiddle Encyclopedia.