Jean Paul Getty December 15, 1892 – June 6, 1976) was an American-born British industrialist. He founded the Getty Oil Company, and in 1957 Fortune magazine named him the richest living American, while the 1966 Guinness Book of Records named him as the world's richest private citizen, worth an estimated $1.2 billion (approximately $7.88 billion in 2020).

At his death, he was worth more than $6 billion (approximately $15.72 billion in 2020). A book published in 1996 ranked him as the 67th richest American who ever lived, based on his wealth as a percentage of the gross national product.

Despite his vast wealth, Getty was infamously frugal, notably negotiating his grandson's ransom in 1973.

Getty was born in Minneapolis, Minnesota, to Sarah Catherine McPherson (Risher) and George Getty, who was in the petroleum business.

He enrolled at the University of Southern California, then at University of California, Berkeley. In 1913, he obtained a diploma in Economics and Political Science from the University of Oxford, having enrolled as a non-collegiate student on November 28, 1912. He spent his summers between studies working on his father's oil fields in Oklahoma. Running his own oil company in Tulsa, he made his first million by June 1910. The Nancy Taylor No. 1 Oil Well Site near Haskell, Oklahoma, was crucial to his early financial success. This oil well was the first to be drilled by J. P. Getty.

Getty carefully invested his resources during the Great Depression. Getty acquired Pacific Western Oil Corporation. He began the acquisition (completed in 1953) of the Mission Corporation, which included Tidewater Oil and Skelly Oil. In 1967 the billionaire merged these holdings into Getty Oil. 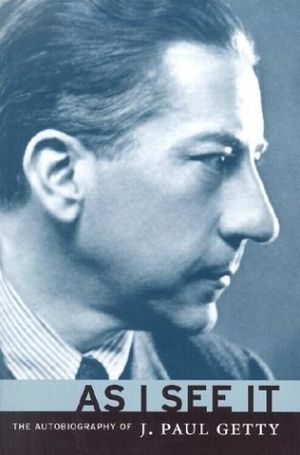 The cover of As I See It, Getty's autobiography

Beginning in 1949, Getty paid Ibn Saud $9.5 million in cash and $1 million a year for a 60-year concession to a tract of barren land near the border of Saudi Arabia and Kuwait. No oil had ever been discovered there. After spending $30 million over four years, oil was discovered there. From 1953 onward, Getty's gamble produced 16,000,000 barrels (2,500,000 m3) a year, which contributed greatly to the fortune which made him one of the richest people in the world.

Getty learned to speak Arabic which helped his unparalleled expansion into the Middle East. Getty owned the controlling interest in nearly 200 businesses, including Getty Oil. Associates identified his overall wealth at between $2 billion and $4 billion. It did not come easily, perhaps inspiring Getty's widely quoted remark—"The meek shall inherit the earth, but not the mineral rights."

Getty wrote a very successful book entitled How to Be Rich'.' He famously had a pay phone installed at Sutton Place, helping to seal his reputation as a miser.

He moved to England in the 1950s and loved English culture (Anglophile). He lived and worked at his 16th-century Tudor estate, Sutton Place near Guildford; the traditional country house became the centre of Getty Oil and his associated companies and he used the estate to entertain his British and Arabian friends (including the British Rothschild family and numerous rulers of Middle Eastern countries). Getty lived the rest of his life in the British Isles, dying of heart failure at the age of 83 on June 6, 1976.

Getty was married and divorced five times. He had five sons with four of his wives:

On July 10, 1973 in Rome, 16 year old John Paul Getty III was kidnapped and a ransom of $17 million was demanded over the phone for his safe return. However, "the family suspected a ploy by the rebellious teenager to extract money from his miserly grandfather." When the kidnappers finally reduced their demands to $3 million Getty senior agreed to pay no more than $2.2 million - the maximum that would be tax deductible. He loaned his son the remaining $800,000 at 4% interest.

Paul III was found alive in southern Italy shortly after the ransom was paid. After his release Paul III called his grandfather to thank him for paying the ransom but Getty refused to come to the phone. Nine people were later arrested for the kidnapping, but only two were convicted.

Paul III was permanently affected by the trauma. After a stroke in 1981, Paul III was rendered speechless, nearly blind and partially paralyzed for the rest of his life. He died thirty years later on February 5, 2011 at the age of 54.

Getty defended his initial refusal to pay the ransom on two points. First, he argued that to submit to the kidnappers' demands would immediately place his other fourteen grandchildren at the risk of copy-cat kidnappers.

Getty died June 6, 1976, Sutton Place near Guildford, Surrey, England. He was buried in Pacific Palisades, Los Angeles County, California at the Getty Villa. The grave site is not open to the public.

All content from Kiddle encyclopedia articles (including the article images and facts) can be freely used under Attribution-ShareAlike license, unless stated otherwise. Cite this article:
J. Paul Getty Facts for Kids. Kiddle Encyclopedia.