Chatsworth is a suburban neighborhood in the City of Los Angeles, California, in the San Fernando Valley.

The area was home to Native Americans, some of whom left caves containing rock art. Chatsworth was explored and colonized by the Spanish beginning in the 18th century. The land was part of a Spanish land grant, Rancho Ex-Mission San Fernando, in the 19th century, and after the United States took over the land following the Mexican–American War, it was the largest such grant in California. Settlement and development followed.

Chatsworth has seven public and eight private schools. There are large open-space and smaller recreational parks as well as a public library and a transportation center. Distinctive features are the former Chatsworth Reservoir and the Santa Susana Field Laboratory.

The neighborhood has one of the lowest population densities in Los Angeles and a relatively high income level.

Chatsworth is the home of the Iverson Movie Ranch, a 500-acre area which was the most filmed movie ranch in history, as more than 2,000 productions used it as a filming location.

The 2000 U.S. census counted 35,073 residents in the 15.24-square-mile Chatsworth neighborhood—or 2,301 people per square mile, among the lowest population densities for both the city and the county. In 2008, the city estimated that the population had increased to 37,102. In 2000 the median age for residents was 40, considered old for city and county neighborhoods; the percentages of residents aged 35 and older were among the county's highest.

The neighborhood was considered "moderately diverse" ethnically within Los Angeles, with a relatively high percentage of whites and of Asian people. The breakdown was Whites, 65.7%; Latinos, 13.5%; Asians, 14.4%; Blacks, 2.2%; and others, 4.2%. Korea (10.4%) and the Philippines (9.3%) were the most common places of birth for the 25.2% of the residents who were born abroad—a low figure for Los Angeles.

In 2000 there were 2,933 military veterans, or 10.8% of the population, a high percentage compared to the rest of the city. The percentages of married people were among the county's highest. The rate of 10% of families headed by single parents was low for the city.

Chatsworth is flanked by:

This region experiences hot and dry summers, with average daily high temperatures of 90–100 °F. According to the Köppen Climate Classification system, Chatsworth has a warm-summer Mediterranean climate, abbreviated "Csb" on climate maps.

Chatsworth was inhabited by the Tongva-Fernandeño, Chumash-Venturaño, and Tataviam-Fernandeño Native American tribes. Native American civilizations had inhabited the Valley for an estimated 8,000 years. Stoney Point is the site of the Tongva Native American settlement of Asha'awanga or Momonga, that was also a trading place with the neighboring Tataviam and Chumash people. The nearby Burro Flats Painted Cave remains a legacy of the Chumash culture's rock art and solstice ceremony spirituality. 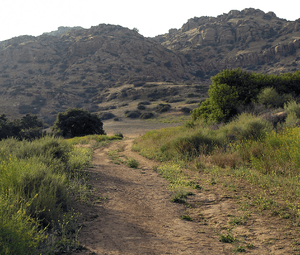 The Native American trail that had existed from the Tongva-Tatavium village called rancheria Santa Susana (Chatsworth) to another village, replaced by Mission San Fernando, became the route for missionaries and other Spanish travel up and down California. It was part of the El Camino del Santa Susana y Simi trail that connected the Valley's Mission, Los Angeles pueblo (town), and the southern missions with the Mission San Buenaventura, the Presidio of Monterey, and the northward missions. The trail crossed over the Santa Susana Pass to the Simi Valley, through present day city park Chatsworth Park South and the Santa Susana Pass State Historic Park. In 1795, the Spanish land grant had been issued for Rancho Simi, reconfirmed in 1842 by the Mexican governor. Its lands included part of current Chatsworth, westward from Andora Avenue.

In 1821, after the Mexican War of Independence from Spain, the Mission San Fernando became part of Alta California, Mexico. In 1834, the Mexican government began redistributing the mission lands. In 1846, the Mexican land grant for Rancho Ex-Mission San Fernando was issued by Governor Pío Pico. It was bounded on the north by Rancho San Francisco and the Santa Susana Mountains, on the west by the Simi Hills, on the east by Rancho Tujunga, and on the south by the Montañas de Portesuelo (Santa Monica Mountains). The Rancho Ex-Mission San Fernando received a Federal land patent to retain ownership by the United States Public Land Commission in 1873 and was the single largest land grant in California. 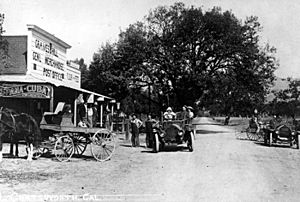 The center of Chatsworth, 1911, on what is now Topanga Canyon Boulevard.

In 1869, the grantee's son, Eulogio F. de Celis, returned from Spain to Los Angeles. In 1874, the family sold their northern half of Rancho Ex-Mission San Fernando to northern Californians, California State Senator Charles Maclay and his partners George K. Porter, a San Francisco shoe manufacturer, and his brother Benjamin F. Porter. The Porters’ land was west of present-day Sepulveda Boulevard including most of Chatsworth, and the Maclay land was east of Sepulveda Boulevard.

The Old Santa Susana Stage Road or Santa Susana Wagon Road continued in use as an alternative to the route along El Camino Viejo from 1861 to 1875, replacing the older road as the main route between Los Angeles and San Francisco. In 1876, the Southern Pacific Railroad opened a tunnel through the Newhall Pass, enabling rail connections from Los Angeles north to San Francisco, and rail travel soon replaced travel by stagecoach between Los Angeles and San Francisco. From this time, the stagecoach traffic to Santa Barbara once again used the coast route, and the Santa Susana Pass road was relegated to local traffic. 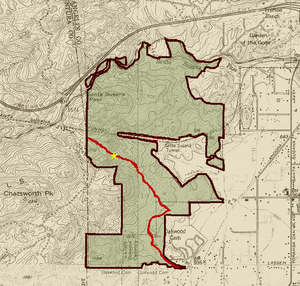 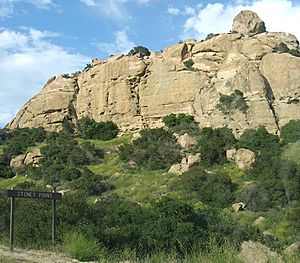 A distinctive feature in Chatsworth is the Chatsworth Dam and reservoir. Built in 1918 as part of the Los Angeles Aqueduct system, the property belongs to the Los Angeles Department of Water and Power. Due to increasing concerns of the water quality because of algae plumes and storm water inflow, it was taken out of service in August 1969. After the 1971 San Fernando earthquake additional concerns for seismic safety led to its abandonment by the LADWP as a storage facility. Chatsworth Oaks Park and the Chatsworth Nature Preserve are located here giving views of migrating birds and other animals, and their sounds such as the coyotes calling in the evening. The views of the rocky and dramatic Simi Hills surround the open space.

Chatsworth Reservoir is classified by the Los Angeles Times as a city neighborhood, but "because there are relatively few homes in this area," the Times does not provide separate statistics for it but adds them to Chatsworth. The Devonshire and Topanga stations of the Los Angeles Police Department provide services in the area.

Chatsworth is the home of the National Notary Association and the headquarters for Premier America (formerly Litton Federal Credit Union) and Matadors Community Credit Union.

The Santa Susana Field Laboratory (SSFL), once busy with Rocketdyne testing rocket engines and Atomics International doing nuclear research, is quiet and high in the Simi Hills west of Chatsworth. It has been closed, will undergo an extensive environmental cleanup, and will become an open-space park. The park will permanently add to Chatsworth's scenic backdrop, greenway, and hiking opportunities.

Some current businesses based in Chatsworth are Capstone Turbine, Natel Engineering, and Hydraulics International. Lamps Plus has production and distribution facilities here.

Titus Software's United States subsidiary once had its headquarters in Chatsworth.

Seltzer Motor Industries, of Chatsworth, in 1979 produced the Willow, a two-seat sports car kit. It is the first transverse, inline four-cylinder, mid-engined kit car ever offered to the public.

Thirty-four percent of Chatsworth residents aged 25 and older had earned a four-year degree by 2000, an average percentage for the city.

Schools within the Chatsworth boundaries are: 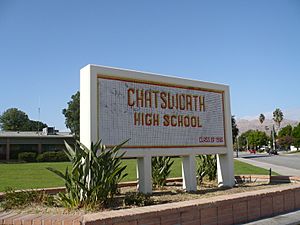 All content from Kiddle encyclopedia articles (including the article images and facts) can be freely used under Attribution-ShareAlike license, unless stated otherwise. Cite this article:
Chatsworth, Los Angeles Facts for Kids. Kiddle Encyclopedia.