Porter Ranch is an affluent neighborhood in the northwest region of the San Fernando Valley region of the city of Los Angeles, California.

The neighborhood is bounded by Brown's Canyon/Chatsworth on the south and west, Northridge on the south, and Granada Hills on the northeast and east. The Santa Susana Mountains, which separate the San Fernando and Santa Clarita valleys, lie to the north. The principal thoroughfares are Mason Ave., Corbin Ave., Porter Ranch Drive, Tampa Ave. and Reseda Blvd., running north-south, and Sesnon Blvd., Rinaldi St. and the Ronald Reagan Freeway (State Route 118), running east and west. The Porter Ranch ZIP code is 91326.

Porter Ranch is in the hilly northwestern tip of the San Fernando Valley, where, according to a 2008 Los Angeles Times article, it was a "calm outpost of Los Angeles" that attracted residents "seeking sanctuary from the urban hubbub." It was noted that the neighborhood had "some of the cleanest air in the Valley year-around—some of which is attributable to winds that sweep through the community regularly." Nevertheless, "those same winds, which have been clocked at 70 mph, take down trees and holiday lights." 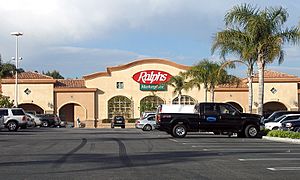 A Ralphs market in Porter Ranch

New home building that eventually took place in the Porter Ranch area in the 1990s–2000s, including the Renaissance Summit development, was mired in controversy and Los Angeles politics in the late 1980s and early 1990s. Existing residents of the Porter Ranch area feared the increased traffic that would be brought by the planned building of an area commercial complex to service the new homes being built. Developments were also criticized for destroying the natural beauty of the brush and wild areas that inhabited the space before the houses were built.

In the late 80s, there was an attempt to connect Sesnon Boulevard, the road that flanks the north side of the neighborhood, to its counterpart across the Aliso Canyon, also named Sesnon, via a bridge to be named simply, the "Aliso Canyon Bridge". This plan never came to fruition due to demonstrations from the residents of Porter Ranch, the primary opponents of the bridge, who believed that connecting the road to the neighborhood across the canyon would bring "crime...drag racing, and drug dealing". Residents were also afraid of Sesnon becoming "a [highway] 118 alternate route", which would "send many cars through Porter Ranch".

Proponents of the bridge said that there was a "critical need" to build a bridge because "the city of Los Angeles has installed heavy-duty guard rails to stop any vehicle that is out of control as it moves east at Beaufait. There is a much smaller rail 200 feet farther east...however, the first guard rail is usually partially broken because of out-of-control vehicles hitting it. Before it can be repaired, there is almost no protection to prevent a vehicle from falling into Aliso Canyon. Additionally, if a vehicle heading west on Sesnon becomes lost, there is no barrier to prevent it from falling into this deep canyon." Despite the proponents' argument about the severity of the situation, the bridge was never built. 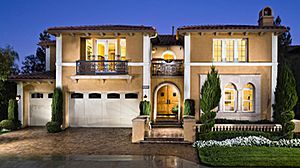 On October 23, 2015, Southern California Gas Company workers discovered a leak in one of the over 110 wells at the Aliso Canyon natural gas storage facility, about one mile north of homes in Porter Ranch. The gas blowout began spewing 110,000 pounds of methane per hour. The blowout involved gas stored under pressure in an underground reservoir; the stored gas included mercapatan (tert-Butylthiol), an odorant added to the odorless natural gas to produce a "rotten egg" smell for safety. The California Air Resources Board estimated that the leak increased California's methane-gas emissions by 25%.

By order of the Los Angeles County Dept of Health, the company relocated thousands of families from the Porter Ranch area; the Federal Aviation Administration established a temporary flight restriction over the leak site until March 2016. On December 15, the county of Los Angeles declared a state of emergency, and two days later it approved a plan to close two schools in the area. Officials estimated that the leak would take months to repair.

On January 11, 2016 Mitchell Englander, the LA City Councilman representing Porter Ranch, said "Most people weren't aware that one of the largest gas storage facilities in the United States was in their backyard. There was, from what we're hearing, no disclosure when they bought their homes."

On February 18, 2016, state officials announced that the leak was permanently plugged.

On March 12, 2016, Los Angeles County Public Health Department officials say its test of dust in Porter Ranch homes turned up the presence of metals, including barium, that could have caused the kinds of health symptoms some residents have reported experiencing even after the big gas blowout was plugged.

With a population density of 4,462 people per square mile (1,723/km2), Porter Ranch is among the lowest-density neighborhoods of the city of Los Angeles, but the density is about average for the county.

The median household income was $121,428 in 2008 dollars, a high figure for the city and the county. In Los Angeles County, Bel-Air, Hidden Hills and Rolling Hills had the most similar household incomes. The percentages of households that earn $60,000 and above were high for the county. Porter Ranch is rated the wealthiest neighborhood in the San Fernando Valley, with Encino ranked second.

All content from Kiddle encyclopedia articles (including the article images and facts) can be freely used under Attribution-ShareAlike license, unless stated otherwise. Cite this article:
Porter Ranch, Los Angeles Facts for Kids. Kiddle Encyclopedia.