E.T. the Extra-Terrestrial facts for kids

E.T. the Extra-Terrestrial is a 1982 American science fiction movie. It was directed by Steven Spielberg and written by Melissa Mathison. It tells the story of Elliott, a lonely boy who makes friends with an extraterrestrial, called "E.T.", who is stranded on Earth. Elliott and his siblings help the extraterrestrial return home. They have to keep it hidden from their mother and the government.

E.T. was a very popular movie. It did better than Star Wars. The movie became the highest-grossing movie of all time, a record it held for ten years.

A group of alien botanists secretly visit Earth under cover of night to gather plant specimens in a California forest. When government agents appear on the scene, the aliens flee in their spaceship, but in their haste, one of them is left behind. In a suburban neighborhood in the San Fernando Valley, a ten-year-old boy named Elliott is spending time with his brother, Michael, and his friends. As he returns from picking up a pizza, he discovers that something is hiding in their tool shed. The alien promptly flees upon being discovered. Despite his family's disbelief, Elliott leaves Reese's Pieces candy to lure the alien to his house. Before going to sleep, Elliott realizes it is imitating his movements. He feigns illness the next morning to stay home from school and play with it. Later that day, Michael and their five-year-old sister, Gertie, meet it. They decide to keep it hidden from their mother, Mary. When they ask it about its origin, it levitates several balls to represent its planetary system and then demonstrates its powers by reviving dead chrysanthemums. 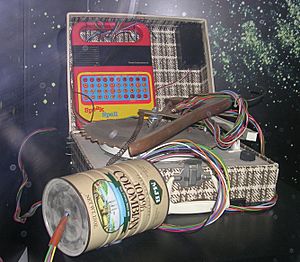 Makeshift communicator used by E.T. to phone home. Among its parts is a Speak & Spell, an umbrella lined with tinfoil, and a coffee can filled with other electronics.

At school the next day, Elliott begins to experience a psychic connection with the alien, including exhibiting signs of intoxication (because it is at his home, drinking beer and watching Tom & Jerry), and he begins freeing all the frogs in his biology class. As the alien watches John Wayne kiss Maureen O'Hara in The Quiet Man on television, Elliott then kisses a girl he likes in the same manner and he is sent to the principal's office.

The alien learns to speak English by repeating what Gertie says as she watches Sesame Street and, at Elliott's urging, dubs itself "E.T." E.T. reads a comic strip where Buck Rogers, stranded, calls for help by building a makeshift communication device and is inspired to try it himself. E.T. receives Elliott's help in building a device to "phone home" by using a Speak & Spell toy. Michael notices that E.T.'s health is declining and that Elliott is referring to himself as "we".

On Halloween, Michael and Elliott dress E.T. as a ghost so they can sneak him out of the house. That night, Elliott and E.T. head through the forest, where they make a successful call home. The next day, Elliott wakes up in the field, only to find E.T. gone. Elliott returns home to his distressed family. Michael searches for and finds E.T. dying next to a culvert. Michael takes E.T. home to Elliott, who is also dying. Mary becomes frightened when she discovers her son's illness and the dying alien, just as government agents invade the house. Scientists set up a hospital at the house, questioning Michael, Mary and Gertie while treating Elliott and E.T. Their connection disappears and E.T. then appears to die while Elliott recovers. A grief-stricken Elliott is left alone with the motionless E.T. when he notices a dead chrysanthemum, the plant E.T. had previously revived, coming back to life. E.T. reanimates and reveals that his people are returning. Elliott and Michael steal a van that E.T. had been loaded into and a chase ensues, with Michael's friends joining them as they attempt to evade the authorities by bicycles. Suddenly facing a police roadblock, they escape as E.T. uses telekinesis to lift them into the air and toward the forest, like he had done for Elliott before.

Standing near the spaceship, E.T.'s heart glows as he prepares to return home. Mary, Gertie, and "Keys", a friendly government agent, show up. E.T. says goodbye to Michael and Gertie, as she presents him with the chrysanthemum that he had revived. Before boarding the spaceship, he embraces Elliott and tells him "I'll be right here", pointing his glowing finger to Elliott's forehead. He then picks up the chrysanthemum, boards the spaceship, and it takes off, leaving a rainbow in the sky as everyone watches it leave. 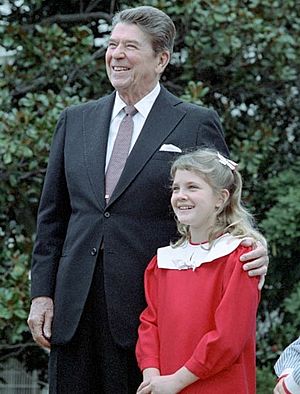 President Reagan with Drew Barrymore at a ceremony launching the Young Astronauts program on the south lawn. October 17, 1984

Having worked with Cary Guffey on Close Encounters of the Third Kind, Spielberg felt confident in working with a cast of mostly child actors.

The major voice work for E.T. was Pat Welsh, an elderly woman who lived in Marin County, California. Welsh smoked two packets of cigarettes a day, which gave her voice a quality that sound effects creator Ben Burtt liked. Burtt also recorded 16 other people and various animals to create E.T.'s "voice". These included Spielberg; Debra Winger; Burtt's sleeping wife, who had a cold; a burp from his USC movie professor; and raccoons, sea otters, and horses.

Doctors working at the USC Medical Center were recruited to play the doctors who try to save E.T. Spielberg felt that actors in the roles, performing lines of medical talking, would come across as unnatural.

All content from Kiddle encyclopedia articles (including the article images and facts) can be freely used under Attribution-ShareAlike license, unless stated otherwise. Cite this article:
E.T. the Extra-Terrestrial Facts for Kids. Kiddle Encyclopedia.