Granada Hills is a suburban neighborhood in the San Fernando Valley region of the City of Los Angeles. The community has a sports program and a range of city recreation centers. The neighborhood has fourteen public and ten private schools.

The community began as dairy farm and orchard known as the Sunshine Ranch which grew apricots, oranges, walnuts and beans. Vestiges of former citrus groves can still be seen in orange, lemon or grapefruit trees in many residential yards. In 1916, the San Fernando Valley's first oil well was drilled in what is now Granada Hills. The oil well was located at the northern tip of Zelzah Avenue. Granada Hills was founded in 1926 as "Granada;" the "Hills" portion of the name was added 15 years later.

Granada Hills is located at the foothills of the Santa Susana Mountains, north of the North Hills, Northridge, west of Mission Hills and Sylmar, and east of the Porter Ranch neighborhoods of Los Angeles. The Ronald Reagan Freeway–Route 118 runs along its southern side.

The median yearly household income in 2008 was $83,911. Renters occupied 26.4% of the housing stock. The average household size of 2.9 people was considered average for Los Angeles. The percentages of married men (60.4%) and women (58.5%) were among the county's highest. There were 4,032 veterans, or 10.5% of the population, a high proportion compared to the rest of the city. 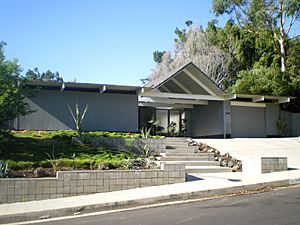 One of the Eichler Homes

Granada Hills is composed mostly of Mid-Century modern architecture. Of note is the "Balboa Highlands" tract built by iconic developer Joseph Eichler. Many of these homes, which are North of Rinaldi/West of Balboa, have been featured in movies, commercials, magazine pictorials and appear in books about Eichler or mid-century architecture. 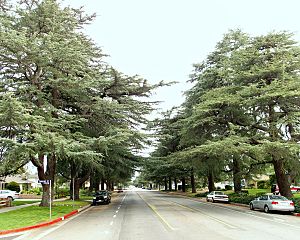 White Oak Avenue, between San Fernando Mission and San Jose Street was declared a Los Angeles Historic-Cultural Monument on August 3, 1966 for the 101 Deodar Cedar trees that line the street. The trees are native to the Himalayas and appreciated for their size, beauty and timber. White Oak Avenue trees was used as the back-drop in the flying bicycles scene in the 1982 film "E.T. the Extra-Terrestrial".

O'Melveny Park, the second largest park in Los Angeles, consists of a large undeveloped area and a much smaller developed section with several dozen citrus trees, a small intermittent stream, and grass and picnic areas. This 672-acre (2.72 km2) park includes hiking trails and fire roads, including a grassy promontory from which a view of the northeastern portion of the San Fernando Valley may be seen. Mission Point and its environs are popular mountain biking and hiking areas. The view from the top of Mission Point (called "Mission Peak" by many residents), the highest point in Granada Hills, is striking, taking in most of the San Fernando Valley. In clear weather, one can see the Pacific Ocean and Downtown Los Angeles. The area around the peak is home to deer, golden eagle, bobcats, mountain lions, raccoons, and coyotes.

Zelzah Park, an unstaffed park, has a bridle path, a children's play area, and picnic tables.

Thirty-two percent of Granada Hills residents aged 25 and older have earned a four-year degree by 2000, an average percentage for the city. 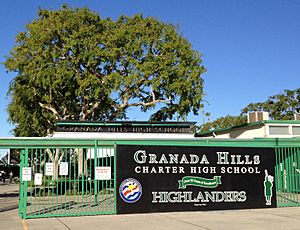 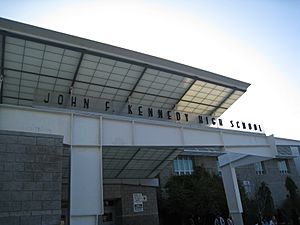 Schools within the Granada Hills boundaries are: 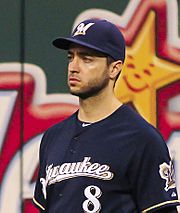 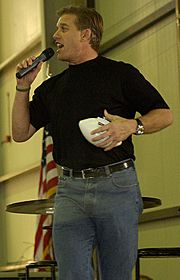 All content from Kiddle encyclopedia articles (including the article images and facts) can be freely used under Attribution-ShareAlike license, unless stated otherwise. Cite this article:
Granada Hills, Los Angeles Facts for Kids. Kiddle Encyclopedia.